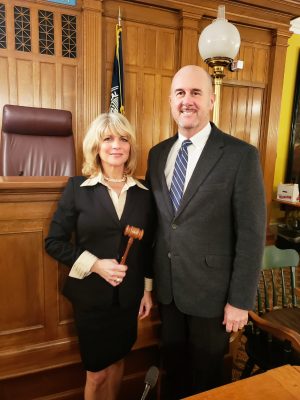 Putnam County is in female hands.

With the recent appointment of Toni Addonizio, R-Kent, as chairwoman of the Putnam County Legislature, both the legislative and executive branches of county government are held by females. (The county executive is MaryEllen Odell.)

Addonizio, who served as vice chairwoman for the past two years, is entering her sixth year on the Legislature, having served as chairwoman of the Rules, Economic Development, and Health Committees. She is a member of the task force fighting the war on opioids, was instrumental in bringing the Hope Not Handcuffs program to the county, is a member of the Putnam County Veterans Medal Advisory Board, and recently helped the Putnam SPCA find suitable office space, according to Castellano.

“I have no doubt that Legislator Addonizio will be up for the challenge in 2020 and will make an outstanding chairwoman,” he said.

“She’s a very hardworking legislator with a personal and professional demeanor,” he said. “She has always put the people of Putnam County first.”

Legislator Nancy Montgomery of Philipstown, the only Democrat on the board, said that while she supports the selection of Addonizio as chairwoman, she wanted to “clarify” that the decision to nominate her was made by her Republican colleagues in caucus, without public input.

“I’m pointing out that these decisions are made amongst legislators behind closed doors,” said Montgomery, who added, “I like working with Legislator Addonizio and I look forward to voting for her.”

“I want to thank everyone for their confidence in me, and it is an honor to serve,” said the new chairwoman. “It is a responsibility I take very seriously and I am humbled by the appointment.”

Although the county will surely face challenges in 2020, Addonizio said, “We will continue to advocate for the people of Putnam County as we deliver programs and services.”

She then nominated Sullivan to serve as deputy chairman.

“Neal is always seeking to protect the taxpayers of Putnam County,” said Addonizio. “He is a true public servant with a strong sense of community involvement.”

Sullivan was re-elected to the Legislature in November and is beginning his fourth year on the governing body. He has been chairman of the Rules Committee, and served on the Audit, Economic Development, Personal and Protective Committees.

He is a Carmel High School graduate and is running his family business in Carmel, while being a member of the Carmel Rotary Club, the Knights of Columbus, and the Greater Mahopac-Carmel Chamber of Commerce, according to Addonizio.

“With Neal’s business background, leadership qualities, knowledge and experience, I am proud to nominate Neal as deputy chairman,” she said.

The appointment was seconded by Legislator Paul Jonke, R-Southeast.

“Neal has done a fatalistic job in his three years on this Legislature,” said Jonke. “I think he would make a fantastic deputy chairman.”

Sullivan’s appointment received unanimous support from his colleagues. “I really look forward to 2020, with all the great things we have on the agenda,” he said.