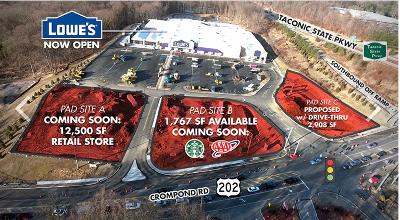 Three projects that stand to boost Yorktown’s economy were approved by planning officials Monday night, including a possible Trader Joe’s.

An application to construct a specialty grocer at the Lowe’s Plaza on Crompond Road was unanimously approved by the Yorktown Planning Board Monday night. Officials say that the building is expected to be a Trader Joe’s.

Plans submitted by Breslin Realty Development Corp. call for the construction of a 12,500-square-foot specialty grocery store and an expanded parking lot on the western side of the plaza that opened last year.

“The Planning Board and Planning Department have been instrumental in ushering in real progress for the Yorktown community this year despite the challenges of the COVID pandemic,” Town Supervisor Matt Slater said. “The specialty grocer is an acknowledgement that our community is an attractive market for national retailers.”

The original site plan that went before planners last year called for a 7,600-square-foot building and parking lot for unknown tenants. However, when developers requested an expansion to accommodate a grocer, Breslin Realty, which owns the land, was asked to submit revised plans for what’s deemed Pad Site A.

The shopping center, located at 3200 Crompond Rd., and is off the Route 202 exit on the Taconic Parkway, is currently split into four parcels for potential tenants.

While Lowe’s occupies the parcel furthest from Crompond Road, construction is currently underway for a Starbucks and a AAA office on Pad Site B, which is directly parallel to Route 202. Pad Site C, which sits alongside the Taconic Parkway’s southbound ramp, is sought to house a 2,908-square-foot drive-thru, according to the site plan.

Breslin Realty has yet to confirm which grocer will occupy the vacant space, but speculation has been brewing in recent months. However, according to its website, the realty group has represented and constructed three popular grocers – Trader Joe’s, Walmart, and Stop & Shop.

Also, on Monday, after sitting vacant for over two years, the former Toys “R” Us building in Jefferson Valley will be redeveloped into a self-storage facility. Officials voted to allow applicant Columbia Pacific Advisors to transform the 45,000 square-foot building into a CubeSmart Self Storage located at 621 Bank Road. Plans call for two one-story additions, with one 11,217 square feet and the other 13,254 square feet. The front of the building facing Bank Road will have a covered entrance with some loading space, with existing parking in the lot remaining the same.

“The conversion of the old Toys R Us represents a great leap forward in our efforts this year to find new uses for outdated big-box stores,” Slater said.

The approval is possible under new legislation adopted by the Town Board earlier this year. Battery storage facilities take surplus electricity from the grid when demand is low and return the electricity to the grid at times of peak demand,” officials said.