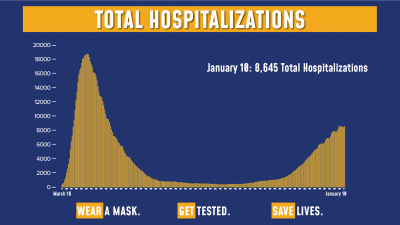 During the peak of the pandemic last spring, active cases had reached 12,000.

“That number is jumping dramatically. These numbers are not going down and there’s a reason why,” Latimer said Monday during a press briefing. “You weren’t in Times Square or in Renaissance Square in White Plains to watch the ball drop, but people were together in private settings and these numbers reflect that continued growth of the infection.”

Coronavirus cases increased by 803 on Monday, bringing the total number of positive cases to 78,534 since the start of the pandemic, state data shows. There are now 11,146 active cases, a number that is nearly identical to the active caseload reported during the height of the pandemic on April 10, Latimer said.

The daily positivity rate is currently 7.06 percent, which is based on 11,381 tests taken on Saturday, according to the state tracker. COVID tests were administered at high rates in Westchester throughout last week, with daily testing reaching a record high of 13,201 on Jan. 7.

On that day, just one week after New Year’s Eve, 1,019 coronavirus cases were reported in the county.

Overall, there have been over 1.5 million COVID-19 tests administered in Westchester since March.

The county reported six more deaths on Monday, resulting in a total of 1,736 COVID-19-related fatalities since March, state data shows. Since Jan. 1, 72 people have died from the virus.

“The numbers are not good,” Latimer said. “Wishing them to be better does not make them so.”

As of Jan. 9, there are 504 virus patients in Westchester hospitals, a roughly 50-person increase over last week, Latimer said. While Latimer is disheartened by the hospitalization rate, he said the only positive takeaway is that the county’s bed count is much higher than those currently admitted.

Putnam County’s total caseload has reached 5,844, with 94 additional positive cases recorded on Monday, according to state data. The area has seen numbers boom over the last five days with cases exceeding 100 all but two days.

The county has reported a total of 524 cases in the last five days, with 116 reported on Thursday, 115 Friday, 94 added on Saturday and 105 recorded Sunday. Putnam’s daily positivity rate is 7.95 percent, with 1,138 tests administered Saturday.

There have been 68 coronavirus-related deaths in Putnam since the pandemic began. No new deaths were reported on Monday.

Statewide there were 13,714 new positive cases on Monday. The daily positivity rate is 6.72 percent.

The state recorded 170 additional COVID-19-related fatalities, bringing the death toll to 31,841 since March.

Total hospitalizations are at 8,645, an increase of 161 over the previous day. Across New York there have been 1,140,156 positive coronavirus cases since the start of the pandemic, according to the state tracker.

Here are the latest updates on Jan. 12

In Gov. Andrew Cuomo’s State of the State address on Monday he urged all New Yorkers to guard against COVID-19 fatigue and stop the spread of the virus to avoid overrunning the state’s hospital system. He warned that if any of the 10 regions’ hospitals become overwhelmed, his administration will be forced to shut down the economy in that region.

On Monday, the first day of sign-up for the second group of eligible vaccine recipients, he announced the distribution system is being expanded to include more sites for the currently eligible four million New Yorkers to be inoculated. The list of eligible workers and the form to register is available at https://am-i-eligible.covid19vaccine.health.ny.gov/Public/prescreener.

While appointments for vaccines will likely stretch several weeks into the future, Cuomo said it is better to have people waiting for the vaccine rather than having the product and too few people signed up. Cuomo was adamant that the vaccines will be administered fairly across the state by supplementing private health care systems to reach underserved communities, predominately communities of color.

“We will not allow politics or wealth to dictate the distribution of this life-saving vaccine,” he said.