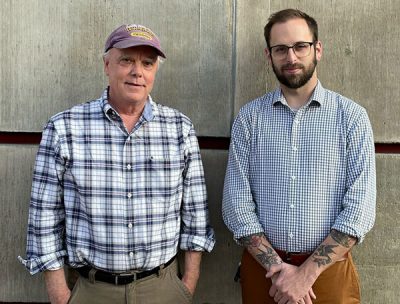 Before local residents take off for the long Memorial Day weekend, Victor Massick is hoping community members will stop by the Hendrick Hudson Free Library in Montrose on Thursday for what he believes is a film that Americans should experience.

For several years, Messick has scheduled periodic multiweek film screenings with a particular theme at the Hendrick Hudson Free Library in Montrose.

His latest program, scheduled for two showings, one in the afternoon along with an evening screening, offers a timely and impactful story.

Massick has selected the 2009 historical television drama “Taking Chance,” starring Kevin Bacon. It’s based on the real story of U.S. Marine Lt. Col. Michael Strobl as he accompanies the remains of Lance Corporal Chance Phelps, who was killed near Baghdad during the Iraq War, on his return home to the states and what he experiences along the way.

“I think it’s an ideal forum for the library,” said Massick. “Libraries are available and are an important outreach for our communities, and I thought that this might be an ideal forum to offer a movie that I think has some messages that can resonate.”

As part of the program, Massick has invited Nick Neuner, a special education teacher at Hendrick Hudson High School, who served four years of active duty overseas in the Marines, including part of that time in Afghanistan, and several more years in the reserves. Neuner will speak of his experiences following the screenings.

Massick hopes that between the movie and the post-screening forum, he’s able to initiate a conversation between veterans and perhaps community members who have never served in the military or who might not even know anyone who has.

“Sometimes people, when you explain the situation or one’s experiences or your experiences, they might get it,” he explained. “They may not fully understand it but they get some aspect of it. Others less so. I think that’s one of the reasons why I want to show this movie. It’s to provide an opportunity for the public at large, the community at large, whether it’s the military community or the civilian community, high school students, older generations and everything in between.”

Massick, who taught for 30 years at Putnam-Northern Westchester BOCES, said when he met Neuner in their education circles, he knew he wanted him to be the guest speaker for the program.

Neuner said being a “behind-the-scenes” person makes talking to even modest-sized groups something that doesn’t come naturally to him. But he found the opportunity intriguing.

“When I was talking to Vic (recently) about everything I experienced coming home, it kind of seems like it did make sense,” Neuner said. “It’s less about me presenting about me and it’s more about the idea of what we need to be moving forward with veterans and this idea of how do you help people reacclimate, how do you help them kind of move forward past these experiences.”

He was in combat in Afghanistan but it was getting back into civilian life that may have been the most challenging portion of his service. Upon his return, Neuner went to college, graduating from Pace and becoming an educator. But because his experiences were so different compared to nearly all of his peers, there is always the feeling that you don’t quite fit in.

When he came home, Neuner said he felt guilt for having been away from his family while also feeling similarly because others are still serving

Even today, Neuner said he doesn’t quite feel as though he fits in with his teacher and colleagues, although he has grown accustomed to minimizing those feelings.

“Even though I had two beautiful kids I really didn’t have a drive to feel like I was doing anything,” Neuner said. “You feel guilty on all ends. You feel guilty you’re not really setting a good example; you feel guilty for leaving the young ones behind.”

Although Massick initially wanted to follow in his father’s footsteps of becoming an Army helicopter pilot, he learned that there are other ways that are just as valid to serve the community and society. For him, it was the classroom.

“There are myriad ways to give back and if a film like this and others can convey that, then I think that’s an important starting point and steppingstone,” Massick said.

The afternoon screening of “Taking Chance” and discussion this Thursday will be from 1:30 to 3:30 p.m. while the evening program is from 7 to 9 p.m. Both programs are free. The Hendrick Hudson Free Library is located at 185 Kings Ferry Rd. in Montrose.