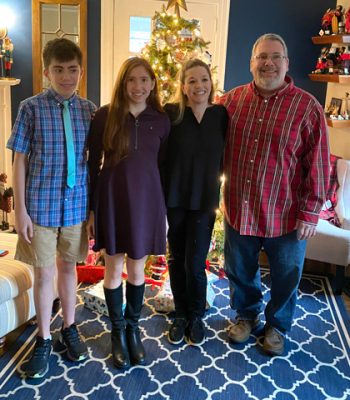 It was the call that changed my life.  My best friend Cheryl suggested I try 23andMe. She had just done it and found some long lost relatives and thought it would be fun. Maybe we would figure out we were distant cousins? So I downloaded the app, filled out the paperwork and ordered the ancestry DNA testing and health screening. I thought nothing of it. I signed my name over and over again indicating I understand that I may find something out that I don’t want to know. After all, you can’t un-know something. Still, I thought nothing of it. I absentmindedly signed my name and checked boxes. A few days later, a small box arrived in the mail. I unpacked the box, spit in the vial and mailed it back. I did think for a moment about how amazing the process was as I dropped the package at the post office. How could some saliva figure out who my sixth cousins are? Science really is hard to wrap your head around.

About three weeks later, an email popped up. “Your reports are ready for viewing.” I sat down at my computer. And there it was. BRCA2. I knew what that was. I remembered the famous New York Times column by Angelina Jolie about her experience with finding out she had the BRCA gene mutation and her decision to have preemptive surgery. She had lost her mom to breast cancer and didn’t want her children to lose their mom. I thought of a friend of mine who lost her mom to breast cancer when she was young and decided she would test herself. Even before she got her results back, she had made the decision that if she too is BRCA positive, she would have preemptive surgery. She didn’t want her children to grow up motherless. She knew what that meant. She was BRCA positive and also found out she had early stage breast cancer. This was years ago. She went through a lot, but she is fine now.

The next month was a dizzying combination of doctor visits, confusion, fear and shock. I did the research. I read the numbers. They weren’t good. The chances of breast cancer for me were up to 86 percent. I also had up to a 26 percent chance of getting ovarian cancer and an increased risk of melanoma and pancreatic cancer. It didn’t take me long to decide that I was not willing to live with these risks. I made the decision to have a double mastectomy and to have my fallopian tubes and ovaries removed. The combination of these surgeries would drastically minimize my risk of breast and ovarian cancer. As scary as it was, I was not willing to take the risk. As a mother, wife, sister, daughter and friend I have too much to live for. Too many people who count on me. I have more to accomplish. More life to live. More adventures to take. I need to be here to watch my children grow up. I haven’t seen enough yet.

And so I set everything in motion. The research had been done, the doctors had been chosen. It was on to the pre-op testing. I had a breast MRI done as part of the process. Before the test, the doctor told me not to be alarmed if I received a call that there was something suspicious found. MRI’s are known to have a lot of false positives. So when I got the call that I needed a biopsy, I did as the doctor instructed. I didn’t panic. A few days after the biopsy, I got the call. It is the call that nobody thinks they will ever get. It is the call that you are never prepared for. CANCER. It is hard to listen to the details after that. Your mind goes blank. But I wrote down what she was saying. When I hung up, I stared at that piece of paper. It had the word cancer on it. But it also said Stage 0. Now I don’t know much about the different stages, but I knew enough to know that is the best possible news you can get if you have to get the diagnosis. I was told that it was so small that it probably would not have been found in my next mammogram. I knew that the doctor was saying that by the time this was found through traditional screening methods, my outcome would probably be very different.

Am I terrified? Of course. But am I forever thankful for my friend who suggested I take this test? Yes. Knowledge truly is power. Finding out I am BRCA positive gave me the chance to change my destiny. I write this because I know there must be others out there walking around in blissful ignorance like I was. Maybe somebody will read this and get tested. Maybe they will have the opportunity to save their own life too. Or the life of their sister. In fact, my friend Karen just ordered her kit after hearing my story. She’s the one that encouraged me to write this.

And in case you are wondering, Cheryl and I found out we are in fact fifth cousins.