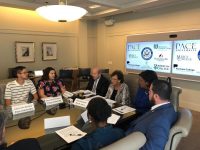 Rep. Nita Lowey leads a roundtable discussion at Pace University that addressing the spiraling costs of higher education and the threat of a reduction in student aid.
Anna Young Photo

During the hour-long discussion, Lowey listened to stories of how students from many of the county’s colleges have struggled with the escalating cost of higher education, mounting student loans and how they have benefited from receiving scholarship money.

“Federal aid is a huge help to us, but the scare for us also is that sometimes it may not always be enough,” Pace student Olivia Wint said. “That’s one of my worries; I don’t want someone’s education to come to a stop simply because of other factors in their life.”

Lowey cautioned that the Promoting Real Opportunity, Success and Prosperity Through Education Reform Act, also known as the Prosper Act, would cut billions from federal student aid and increase the cost of education. The bill would create an annual limit on loans for graduate students, abolish loan forgiveness and eliminate in-school interest subsidies for middle- and low-income students.

Lowey said the “partisan, mean-spirited bill” is dangerous and being pushed by House Republicans to reauthorize the Higher Education Act.

“The ability of students to access a quality, affordable education we all know is key to good paying jobs and economic security, but the rising cost of college has made the burden of student debt a roadblock for too many Americans,” Lowey said. “Under the Prosper Act, more students would have even more debt. This bill is quite simply an assault on the financing of higher education as we know it.”

Lowey said that students in the United States currently hold $1.5 trillion in student loan debt. The average 2016 college graduate has about $37,000 in student loans, she said.

Shelly Connor, a mother of two and a Westchester Community College and New York University graduate, said she disagrees with rising student loan rates. She said by limiting the amount of loans and eliminating loan forgiveness, education would become less accessible for many students, especially those attending community college.

“Federal financial aid is a key part of the funding mix for our students,” Krislov said.

Pace student John-Carlo Bautista said Pace wasn’t his first choice of college, but he ultimately chose to attend the Pleasantville school because he could receive subsidized loans while he focused on his studies and worked a part-time job. Emerald Rodriguez, another Pace student, said access to federal finance aid programs along with the financial aid package from Pace is helping her pursue a nursing degree.

Lowey said she would bring student concerns to Washington in an effort to prevent the cost of higher education from climbing even higher.

“I’m fighting with many of my colleagues to prevent this bill from becoming law,” Lowey said. “We’re going to continue to protect federal investments in higher education and make sure that every student has access to a quality, affordable education.”