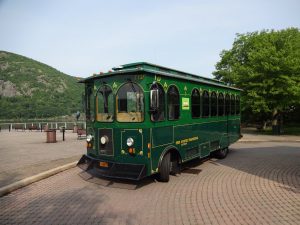 In an effort to increase ridership and reliability of the Cold Spring Trolley, as well as influence tourism and connect residents and visitors with local cultural and historic destinations and businesses, the Cold Spring Chamber of Commerce Trolley Committee is asking the Putnam County Department of Transportation to support a number of goals outlined in its recently-released 2020 Trolley Service Proposal.

The trolley is owned and operated by Putnam County.

“Because the trolley had been positioned as a tourist vehicle, businesses in the area saw it as an asset and we wanted to support that asset,” explained Chamber President Eliza Starbuck.

The volunteer committee was formed in 2018 and members have spoken to more than 100 residents and visitors, conducted outreach and surveyed the community, provided rider support, met with village and county leaders, researched the qualities that make successful public transit systems, and followed a Strengths, Weaknesses, Opportunities and Threats Analysis.

A survey of area residents and elected officials – mostly from Cold Spring, as well as Philipstown and Beacon – was recently answered by mostly adults (74 percent), as well as senior citizens (25 percent) and children and teens.

When asked if a $2-per-trip cash fare would deter them from taking the trolley, about 64 percent of respondents said that would not be a turnoff.

Some of the strengths identified by the SWOT Analysis include that the trolley is Americans with Disabilities Act compliant, that the experience is nostalgic and unique, it receives state funding, it fulfils the demand for public transit, and that the trolley has a long history.

Weaknesses include that the system lacks signage, the vehicle is bulky and has a high-carbon footprint, service is inconsistent, the public is unaware of its stops or schedule, it is a cash-only service, it periodically lacks a dispatcher, and the trolley travels too much geography to get to destinations.

Cold Spring village officials have expressed concern about the number of stops on Main Street and Route 301, and other locations, as well as an impact on traffic, and the effects of the size and capacity of the vehicle.

The committee has proposed changes to the trolley route, to make it one continual loop – reducing stops in Cold Spring village and Beacon, and increasing stops in Nelsonville. In addition, the committee suggests the county manufacture and install street signs at stops – such as the Metro-North stations, certain trailheads, libraries, Magazzino Italian Art, and other points of interest – to inform the public where to catch the trolley.

The committee also suggests keeping the current fees and payment options, especially for one-stop users, introducing a day pass option for those traveling to multiple stops and pricing it at a reduced rate, and exploring digital payment options.

The suggested day pass price is $5 for adults and $2.50 for seniors

In addition, the committee has created a logo that it hopes the county will formally adopt to use as a brand for the trolley service.

The chamber’s 2020 Cold Spring Trolley Proposal has been presented to the villages of Cold Spring and Nelsonville, several local businesses and cultural institutions that are impacted by the trolley, and Putnam County Transportation Supervisor Vinny Tamagna, with whom the committee has been working with.

“He’s been very cooperative and supportive of our efforts,” said Starbuck of Tamagna. “The reception was pretty encouraging.”

Starbuck said that with the proposal now in the county’s hands, chamber members are waiting to see if the county will implement any suggestions in the proposal, and what the next steps are.

The committee said it believes that as the trolley transportation system improves, ridership and community acceptance should increase. With growing emphasis on using green technology and sustainable practices, the committee envisions transitioning to smaller, more efficient hybrid vehicles without losing the trolley’s “vintage” design.