More than 50 people, socially distanced, along with more than 100 cars honked while circling the train station’s roundabout to recognize Biden’s election a couple of hours after national news networks projected he would win the hotly-contested race against President Donald Trump.

Pleasantville resident Meghan Greene saw the event posted on Facebook and decided to come out to the train station and take a moment to celebrate a new administration.

“It just feels like a return to decency,” she said. “A return to someone who has values and core beliefs that align with mine.”

Rhea and David Mallett attended the event because they were grateful and thrilled to hear the news. The Malletts brought their truck with Biden-Harris signs decorating the driver’s side and a large Biden-Harris flag billowing out of the bed of the truck.

“I think we’re the only Biden truck in all of Westchester!” Rhea said.

Members of up2us organized the celebration shortly after the race was called. They played music, waved Biden-Harris flags and held signs to commemorate the win.

“This was a very impromptu decision to follow suit with all these kinds of rallies that are happening all over the country in Manhattan and Washington,” said Iris Lachaud, chair of up2us. “I believe there was one in White Plains so we decided we needed to be with our friends to celebrate.”

Founded in 2015, up2us supported Hillary Clinton’s bid for the Democratic nomination and her presidential campaign in 2016. Founding members of up2us, formerly called Chappaqua Friends of Hillary, stayed together after the 2016 presidential election to work toward President Trump becoming a one-term president.

“And that’s what we’ve been doing for the last four years, is really working on local elections and helping to flip the house in 2018,” board member Kristin Lore said.

Rye resident Lisa Tannenbaum described how she had been volunteering until 9 p.m. Friday night helping with voter protections in North Carolina and Georgia. When she heard the news this morning, she knew she wanted to be in Chappaqua because of all the work she did for the Clinton campaign and over the past four years.

“It’s Joe Biden’s moment, but she [Hillary] made this moment happen,” Tannenbaum said. “And she made it so it could be possible to have our first woman vice president.”

County Executive George Latimer also attended and expressed his confidence in Biden and how he will be a unifying president for the entire country.

“The problems are too complicated and no one side of the debate has all the answers, but you can’t divide the nation and move it forward,” Latimer said. “You have to unify it and I think he can do it.”

Former county legislator Michael Kaplowitz, along with Latimer, gave impromptu speeches during the event, pointing to the stark differences in tone and stature between President Trump and President-elect Biden.

Kaplowitz described how he met Biden at the 2004 Democratic Convention and how he will have intelligent, mature dialogue.

“There is nothing to take back because we have been great all along and Joe will take us to the next level where we belong,” he said. “Let’s go Joe Biden!” 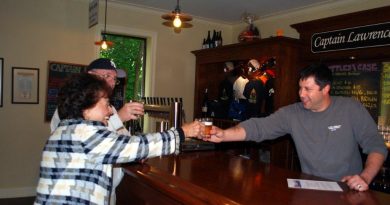