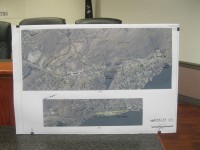 A photograph of the proposed sewer district in Lake Carmel.

The Carmel-Kent Chamber of Commerce held an information forum on Tuesday, March 10 to hear about the proposed sewer district along the Route 52 corridor in Lake Carmel. They discussed the costs, the benefits and the vision for the future.

The proposed sewer district would run along both sides of Route 52 from Anthony’s Jeweler in Carmel, northward to the former Hollywood Motel. The newly renovated Arts on the Lake Center would be also added to the district.

Business owners in the area seemed generally excited about the opportunity. In fact, Kenny Hogan, who owns Kenny’s Carpet One Floor & Home, which is located at 246 Route 52, was disappointed to see that his property was not included in the district.

“We were so close,” he said. “But they cannot extend it out further than they can afford to.”

The cost of installing sewer lines and building a waste water treatment plant is expected to cost about $5 million. The Town of Kent is securing the funding of the construction costs through the New York City Department of Environmental Protection and the county.

The money from DEP would be used to construct a waste water treatment plant for yet-to-be built Kent Manor development, the Frangel Realty site, which had been ordered by the DEP to rehab their treatment plant that will now be decommissioned, and a the proposed new sewer district that would serve 68 parcels along Route 52.

Town Supervisor Kathy Doherty has been negotiating with the county to secure $2.5 million of East of Hudson funds to cover the remains operational costs.

Once built, property owners would have to pay to hook up to the system and for the actual water usage.

Jeffery Contelmo of Insite Engineering estimated that once in operation property owners will pay $769 a month for the use of 200 gallons a day of water. Companies that would utilize a high quantity of water, such as restaurants or dry cleaners, would be charged accordingly.

“Even if it costs the average property owner $1,000 a month, the sewer line will save people money,” said Henry Boyd, president of the Carmel-Kent Chamber of Commerce.

“Even though a property owner may think that the septic system on his property is operating fine, most of these properties have already been red-lined by New York City,” Cutiss said.

Curtiss believed that in the next phase of storm water management the DEP will be telling the property owners to put in a new septic system.

“We believe that septics will come under more and more scrutiny and this is an environmentally challenged area,” he said. “The ground water is basically at street level.”

In addition to the potential cost savings, Contelmo said that having a sewer district will increase the property value along Route 52 and will help make the corridor a more desirable location to have a business.

Along with the sewer district, the county is considering the installation of sidewalks along the northbound side of Route 52, which would be done after the sewer lines were laid.

“Sidewalks help enhance the town and let people know this is a commercial area,” said Curtiss. “We are hopeful that after the sewer lines go in the sidewalk will be laid out and it will pull the commercial district into a hamlet.  It is the concept of making the hamlet more pleasing to the eye, so people want to stop.”

The town is hoping to have a shovel in the ground by 2013 and to have the project completed by 2014.

However, before any of that can happen, an environmental review must be done, a public hearing must be held and then at least 50 percent plus one of the property owners in the proposed district will have to vote in favor of the creation of the sewer district.