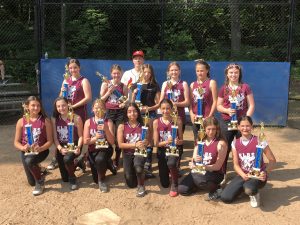 The Cardinals were crowned champions of the oldest division of KLBS youth softball on Saturday.

The Cardinals won the KLBS youth softball championship game on Saturday at Rasor Field in Katonah, defeating the Dodgers in a high-scoring 18-10 affair.

Cardinals head coach Vic Buatte noted how his players found their way in the playoffs, despite a 4-6 record in the regular season.

“The Cardinals are a talented and resilient group of girls who struggled to put all the pieces together during the regular season but would never give up,” Buatte said. “After losing the last five games of the season the girls came together as a team putting up 32 runs in the last two games against two very talented teams to win the championship.”

It was the Dodgers who won first-place in the regular season, with an 8-2 record. In an age division with sixth, seventh and eighth graders, the oldest division in the league, Dodger head coach Steve Grasso mentioned how impressed he was with the performance of his team, made up of 10 sixth graders and just three older players.

“It was an incredible experience to watch the youngest team in the league not only compete but go on to have the best record in the regular season,” Grasso said. “We lost in the final game but each and every girl contributed during the season to make it a year they will remember for years to come.”