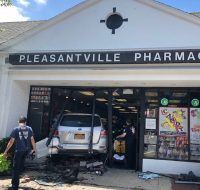 An elderly Chappaqua man crashed his silver Toyota Highlander into Pleasantville Pharmacy midday on Friday, destroying the front window, large segments of the interior and also injuring a customer. The driver, Ray MacDonnell, 90, was not injured, nor was his wife, Patricia, 81, who was seated in the passenger seat. 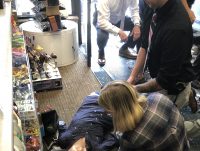 The impact of the crash knocked a female customer inside the pharmacy to the floor, and she was brought to Westchester Medical Center as a precaution but authorities say she was not in critical condition. The customer was standing by the front register when the car crashed through the pharmacy, according to employees. Although authorities are not releasing the name of the customer, pharmacy employees did say she is an elderly Pleasantville resident.

At 12:15 Friday afternoon, following a visit to the pharmacy, Ray MacDonnell was backing out of a parking spot on Wheeler Ave. and bumped another car. After hitting the other vehicle, MacDonnell put his car into drive instead of park by mistake and barreled into the pharmacy at a high speed — at what appeared to be about 50 miles per hour, estimated one eyewitness.

“There was an elderly woman who tried to run as she had entered the store, and she fell because she was trying to run, she lost her balance,” said a witness who was in the front of the store at the time of the accident. “She was not hit by the vehicle. I was very worried about her because of how she fell, but thank goodness nobody was seriously injured or killed. It was horrifying. Glass flying, metal… and it sounded like he was about to maneuver his car again while it was inside the store.”

Police issued MacDonnell a summons for driving off the roadway.

The Examiner did speak with several pharmacy employees who were present at the time of the incident shortly after it occurred. 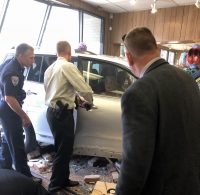 “He just lost control,” said pharmacy employee Karen Alvarez, who was standing near the front at the register when the accident happened… “I just ran. He could have killed someone. It was just that severe.”

Another employee, Heather Johnson, noted how the MacDonnells “were absolutely terrified.”
“They couldn’t believe they hit a store,” she also said. “They seemed startled and lost control of the car.”
Pharmacy employee Alexander Twomey was standing in the back of the pharmacy when he heard a honk and saw the car crash through the front.
“It was just surreal,” said Twomey. “You see it in the movies and you don’t know if you should run or what to do.” 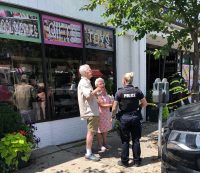 The MacDonnells are regular customers of the pharmacy and had just finished picking up prescriptions.
“We’re all shook up,” Patricia MacDonnell said.

Pleasantville Pharmacy did take to Facebook to alert customers the store is open for business and to state how the best way to support the pharmacy during the trying time is to shop there.

“As the dust begins to settle and losses are being assessed and papers are being filled out, we also need to rebuild as we wait for insurance reimbursements,” it said in the post. “In the upcoming weeks and months ahead, it will be tough as we are just a small mom and pop store. With that being said, any and all sales, no matter how small they may be, will most definitely help us.”