Skip to content
The Putnam Examiner
December 31, 2013 David Propper Putnam
We are part of The Trust Project

Oliverio, a Democrat who represents District 2 in the legislature, said in a statement “it is time for DA Levy to resign from his post immediately.” The renewed call for Levy to step down comes after The Journal News reported that there is a state police investigation into Levy’s office related to its investigation of county sheriff’s candidate Andrew DeStefano in 2009.

This comes after Levy, a Republican, is already being scrutinized concerning his conduct pertaining to the rape case of Alex Hossu, who is a friend of Levy’s. Levy allegedly attempted to influence the case and possibly leaked grand jury information, an action that Westchester prosecutors handling the Hossu case called potentially criminal.

Oliverio said the ongoing allegations continue to contribute to the public’s distrust of the county’s prosecutor’s office. And not only is Oliverio calling for Levy to resign, he’s requesting County Executive MaryEllen Odell to comment on the continued controversy.

“I cannot understand nor fathom why our highest elected County official is not speaking out about this exceedingly sad state of affairs,” Oliverio said in a statement. “To let the constant accusations and continual recriminations about our DA fly, without comment or action, is totally unacceptable.”

Odell so far has remained quiet on the controversy around Levy. When reached Monday she said it is important for the investigation to proceed and wait for the authorities to make a statement on the matter about Levy and his conduct. She also said Oliverio is trying to seek publicity for himself as the longtime legislator weighs a county executive run in 2014.

“To me it’s political rhetoric,” Odell said. “And I don’t play those games.”

She added her duties, pursuant to the county charter, don’t involve inserting herself into any investigation or calling for resignations of a fellow elected official.

“The question is why is he asking me and I think that the answer is obvious,” Odell said. “Is that he’s looking for the county executive spot and he knows that this will get his name in the paper and that’s just the game that he’s playing.”

Oliverio in an interview refuted Odell’s claim and said no one knew about Leibell’s legal troubles unless they were involved in it.

“I didn’t know an investigation was going on,” Oliverio said. “If I did, I certainly would have asked Vinnie to resign, which he ultimately did anyway.”

The most recent complications for Levy came this past Sunday when The Journal News reported that the Attorney General’s Office Public Integrity Bureau has been investigating Levy’s office for prosecuting DeStefano for filing forged nominating petitions, but at the same time ignoring a similar complaint that Republican candidate James Borkowski gave in troubled petition signatures.

This is not the first time Oliverio has publicly commented on Levy and previously asked the rest of the legislature to join him in asking New York State’s Attorney General Eric Schneiderman and Governor Andrew Cuomo to investigate Levy. The other eight Republican legislators declined to join in.

Originally, Oliverio just wanted an investigation in Levy’s conduct in regards to the Hossu case and then a possible resignation. Now, with an actual investigation underway, he feels the right thing for Levy to do is remove himself.

And if Levy resigns and is found to be innocent of any damning allegations, Oliverio said he should run for the District Attorney office again.

“It would be a really good idea to resign the office, let things pass, let the investigation go on, exonerate him or find him guilty of whatever he allegedly did,” Oliverio said. “And then if he can, run for office again. Put it in the hands of the people.” 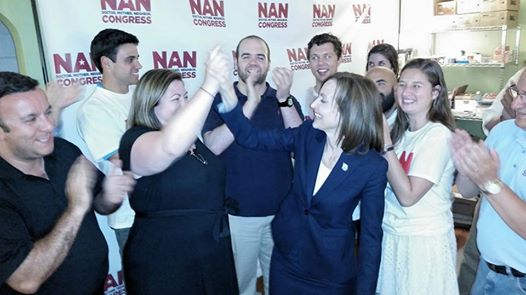