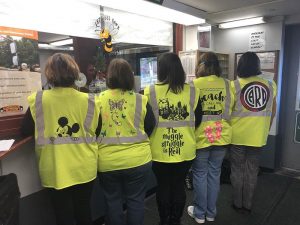 A Brewster school bus driver has found a way to adapt what was once a dreaded part of the job into something she and other drivers now celebrate. With a little critical thinking and perseverance, Eirene Farias has transformed the transportation staff’s bright yellow reflective vests into something they – and students – enjoy.

“The requirement to wear yellow reflective vests came about several years ago in an effort to make the staff more visible while walking in the yard and while inspecting their vehicles,” explained Brewster Central School District Supervisor of Transportation Mary Smith. “The staff have frequently expressed to me that they feel uncomfortable wearing their vests. They’re embarrassed and perceive the vests as a fashion faux pas.”

That’s where Farias stepped in.

“Everyone here complains about the vests,” she said. “I hate when people do nothing but complain. So I said, ‘You know what? I’m going to embrace my vest.’”

Having recently made a plethora of the decorations for her daughter’s wedding, Farias became handy with the Cricut, a die-cutting machine frequently used for crafting. She decided to use her new hobby to personalize her vest.

Once hers was complete, sa friend wanted one and it quickly snowballed from there – becoming an “Embrace the Vest” campaign.

Since the end of last year, Farias has outfitted more than a dozen transportation staff members with a variety of logos and designs, from baseball and Disney characters to Harry Potter and the Argentinian soccer team logo.

“Each driver or monitor waits for the day that they may be the next recipient of the ‘Vest Fairy,’” Smith joked. “This has not only boosted the morale in the department, but it is exciting for the students that ride the buses. Eirene has taken the ‘dreaded vest’ and turned it into something exciting.”

“The designs make students realize their driver is a real person,” she said. “They’ll say, “Oh, you like the Yankees?’ or ‘You like Mickey?’ It sparks a conversation and they behave better.”

“It started because I thought everyone should like their vest and stop complaining and dragging them on the ground,” said Farias. “Everyone who has one that’s done folds them so nicely. They put them in their bags. They love them.”