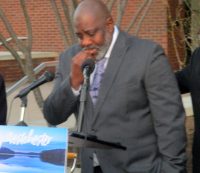 Stanley Ridley, the father of the late Christopher Ridley, became emotional while speaking during the groundbreaking ceremony for the planned Christopher Ridley Memorial on Court Street in White Plains on Jan. 25. Neal Rentz Photo

At the site of tragedy in White Plains in 2008, Westchester County officials are seeking to create something positive.

On Jan. 25, 2008 off-duty Mount Vernon Police Detective Christopher Ridley reportedly witnessed a man beating up another man outside the Westchester County social services building while he was driving his car on Court Street in White Plains. Ridley stopped, scuffled with the suspect and during the altercation Ridley’s gun accidently fired. Several witnesses said Ridley was fatally shot by Westchester County Police after he did not drop his gun as ordered.

A groundbreaking ceremony, attended by several elected officials and members of Ridley’s family, for the planned Christopher Ridley Memorial on Court Street, was held in White Plains on Jan. 25. The completed memorial is scheduled to be dedicated in August, the month of Ridley’s birthday.

County Executive George Latimer said he was reminded of the time about decade ago when he visited the National Civil Rights Museum, which is located in the motel in Memphis where Dr. Martin Luther King Jr. was assassinated in 1968. He recalled being in the room next to the one where King lost his life. “You realize at a moment like that that a man’s life is more than the moment of his death,” Latimer said. “If you can take the moment of his death and talk about the story of his life then you’ve accomplished something that’s good and valuable.”

Through the efforts of the county legislators and with the support of the county executive’s office, “We are taking a place of tragedy, a place of death and we’re going to turn it into something different. We’re going to turn it into the celebration of the life of a man who gave his life for the public as a sworn peace officer,” Latimer said. “And through the tragedy that happened here 11 years ago we will remember him and we will remember the living Christopher Ridley at this place, just as we remember Dr. King in Memphis, Tennessee.”

The Ridley family will mourn the death of Ridley for the rest of their lives and the people here at the ceremony will support the family, Boykin said. Those in attendance also took part in the groundbreaking for the memorial to honor “his life and his legacy,” Boykin said.

County Legislator Lyndon Williams (D-Mount Vernon) told Ridley’s family, “Out of the horrific events that occurred here 11 years ago we stand here with you to let you know that Christopher’s sacrifice will not ever be in vain, that he will never be forgotten.”

Deputy County Executive Ken Jenkins recalled he was across the street in the county office building when Ridley was shot and he heard the shots fired. “We are proud that we’re working together to have the kind of memorial here for Chris that his family, his mother and his father, and his many, many friends can see; a lasting memorial,” Jenkins said. In the aftermath of the shooting of Ridley changes have been made, including the training of law enforcement, Jenkins added.

Ridley’s father, Stanley, was emotional while addressing those attending the ceremony. “This is a hard task,” he said. For the past 11 years every day he remembers that “I don’t have a son,” he said. “You can see what he did on that day that he was going to be a great man. He didn’t have to get out of his car to come here to save other people.”

“I hope that this memorial will make us remember that we all can help and we all should get out there and do something and not badger folks like the police department who get out here every day and put their lives on the line,” Ridley said.