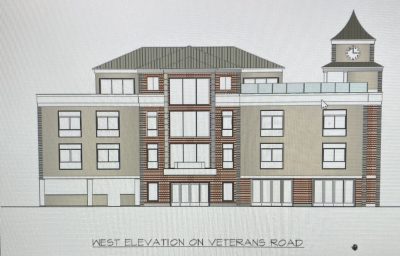 A boutique-style hotel that would include a café and rooftop bar in the heart of Yorktown Heights is the latest project to generate interest as officials look to rejuvenate the area.

During the Yorktown Town Board Work Session Tuesday night, officials reviewed a proposal that would erect a three-floor hotel called Hotel Gardena on about a third of an acre of land at the corner of Veterans Road and Commerce Street, adjacent to Albert A. Capellini Community and Culture Center.

Developers are seeking a zoning amendment to include the hotel as a provision in the C2-R zone. The zoning currently allows for commercial business with residential units on the second floor.

The proposed area has been used as real estate office space in recent years.

“I think it’s an exciting project,” said principal engineer Joe Riina. “I think it would welcome a lot of these types of uses that could be introduced into the Heights area or let’s say on Route 6 where you have additional C2-R zonings.”

Project plans call for a 16-room hotel, with eight rooms, including four suites, on both the second and third floors ranging from 340 square feet to just over 500 square feet. The first floor would see a lobby, lounge and café, which would offer outdoor seating along Veterans Road.

Additionally, plans call for a rooftop bar and grill that would allow for both indoor and outdoor seating. Architect Gene Vetrano said, if approved, the outdoor area would offer water features or propane fire pits in the center of designated seating areas, with cubbies also provided.

There would also be a clocktower built as an identifier for the hotel, though it would require a variance with the proposed height exceeding what’s currently allowed. Variance approval would also be needed for the parking lot, along with plans to narrow Veterans Road.

While the proposal requires approval from both planning and zoning, town officials were enthusiastic about the project, calling it a natural fit for Yorktown. Town Supervisor Matt Slater said he’s received correspondence from residents shocked something this “cool” would happen in Yorktown.

“I’ve gone to some hotels in New York City where they have their roof bars or whatever and they are just wonderful,” Councilwoman Alice Roker said. “It’s pretty neat that we’re going to get one in Yorktown.”