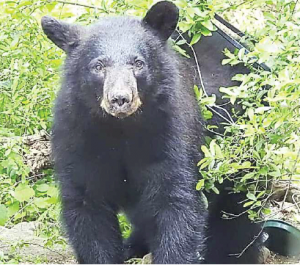 Several black bears have been spotted traveling throughout Westchester over the last few weeks.

A state Department of Environmental Conservation (DEC) biologist advised residents at the Greenburgh Town Board meeting last week on what to do if they spot a black bear and how to resolve a conflict.

Emily Carrollo said there are currently 6,000 to 8,000 black bears in New York State with 30 to 35 percent of those in the Catskill region. Bears are also well-established in the Hudson Valley.

June and July are peak months for bear sightings because in the summer bears are at their most active.

“It’s not necessarily because the black bear population is suddenly growing or that it’s suddenly out of control,” Carrollo said. “A lot of it just has to do with their natural behavior and their natural movement period.”

There has been a rash of bear sightings in recent weeks at country clubs and playgrounds in Scarsdale, Hartsdale, Greenburgh and even at the City Center in downtown White Plains, said Greenburgh Supervisor Paul Feiner.

During her presentation, Carrollo described black bears as generally lazy and wanting to find the easiest meal possible, which is what puts them in contact with humans.

“They can get comfortable in a human environment, especially at night, when there’s much less human activity, and they investigate a lawn to see if there’s any bird feeder up or any garbage around,” Carrollo said.

Due to their range of smell, which is up to a mile, black bears can easily find food that has been left outside including pet food, bird feeder and garbage, she said. Carrollo emphasizes the only reason bears move is because of resources.

To minimize interaction with bears, humans must be careful of what they are leaving outside of their homes.

“If you remove the attractant, you will remove the bear,” Carrollo said.

The state DEC has not removed the bears that have been spotted in Westchester this year because they aren’t in an area long enough and they have not caused damage or harm to themselves or humans, she said.

“The bear is moving on, it’s not finding those resources to hang around and it’s continuing doing what it’s doing and behaving the natural way it should behave,” Carrollo said.

If an individual comes in contact with a bear, Carrollo said it is important that people make sure that the animal doesn’t feel comfortable in a human landscape. One should “haze” the bear by clapping their hands, banging pots and pans or using an airhorn to make plenty of noise. In most cases the bear will retreat.

“In reality, it’s really the bear being just as scared as we are and just as surprised as we are,” Carrollo said. “They run off and go in the other direction.”

She said to always be aware of your surroundings and think about what you should do if you’re in an area where there have been bears.