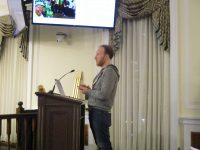 The company that operates the White Plains Bikeshare program is seeking to introduce electronic pedal bikes to its pilot program, which began last June.

Representatives of Lime, the company that operates the program in White Plains, gave an update on the program at the Feb. 25 special Common Council meeting.

Lime Community Affairs Manager Brett Swanson said the program has been very successful not only in White Plains, but in many other cities. “We have achieved success in over 100 major markets in the United States” in the course of its two year history, Swanson said, adding the company also operates internationally.

Lime Operation Manger Paul Holley said so far over 40,000 rides have been taken by nearly 10,000 riders in White Plains using 300 bikes. “The train station tends to be our most popular destination,” he said. There have only been a few complaints about the program and they are responded to by Lime’s employees in White Plains Operations Team, he said. “They are monitoring the product out in the field,” he said. Safety Ambassadors provide outreach and provide information to the public including how to use the service, he said.

To upgrade the program, Lime wants to introduce electronic pedal assist bikes, which the company wants to begin to add to the program on April 1 with some of the bikes. The official launch is slated for May 1, if the city approves the plan, Holley said. 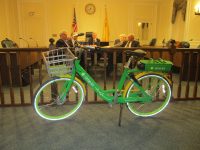 Lime, which runs the White Plains Bikeshare program, is proposing to introduce electronic pedal assist bikes like the one shown above which was on display at the Feb. 25 Common Council special meeting.

Holley said the pedal assist is a little larger and sturdier than the bikes currently being used in the White Plains Bikeshare program. The bike is powered by a rechargeable lithium ion battery to assist bikers, he said. The pedal assist bikes can travel no faster than 15 miles per hour, he said. The battery provides “an extra boost” to riders which is particularly helpful for riding up a hill or taking a long ride, he said. Riders, using their phone apps, would pay a $1 fee to unlock the bike and an additional 15 cents per minute, which would be slightly more expensive than using the current bikes, he noted. The battery will stop producing electricity once 15 miles per hour speed is about to be reached, Swanson said.

Councilwoman Nadine Hunt-Robinson praised the bike sharing effort, saying it was “a great program” that is reducing the city’s carbon footprint. While Hunt-Robinson said she supported the introduction of the pedal assist bikes, she said she was concerned about the safety of the program. She asked what type of safety data the company was compiling, including the number of sidewalk accidents involving bikes used in the bike-sharing program. Holley said data is tracked by the bikes themselves. “It’s constantly in communication,” he said, adding that accident records are compiled by his company. Swanson said safety is increasing on the streets and traffic congestion is being reduced as a result of the bike program.

Councilman Justin Brasch said he also supported Lime’s program and asked how large does the company want it to be in White Plains. Holley said the company would explore potentially increasing the size of the program following the introduction of the pedal assist bikes. “Generally speaking” the company wants to increase the number of bikes in the White Plains program but he does not know how many bikes that would be, Holley said.