A joint investigation with Cold Spring police determined that a vehicle operated by an 18-year-old village woman was traveling southbound on Route 9D at about 6:22 p.m. on June 17 north of the Breakneck Tunnel, when she passed a vehicle in front of her.

Police said her vehicle was unable to get back into her lane in time and her driver’s side mirror struck the driver’s side mirror of a car that was traveling northbound and operated by the Beacon man. The impact of the two mirrors hitting each other caused debris to fly into the man’s vehicle and struck him in the head.

The man then turned his vehicle around into the southbound lane to follow the female driver, police said. After she stopped near a softball field, the man then approached the woman’s car and knocked on the window with a pistol that he was holding.

The man, whose identity was not disclosed, was arrested and charged with second-degree criminal possession of a weapon, a felony, and second-degree menacing, a misdemeanor. He was arraigned in the Village of Nelsonville Court and remanded to the Putnam County Jail on $10,000 cash bail.

The female driver was charged with the misdemeanor count of reckless driving and was issued traffic tickets for moving from the lane unsafely and leaving the scene of an accident.

It was determined that the area where she passed the other vehicle was a no-passing zone. 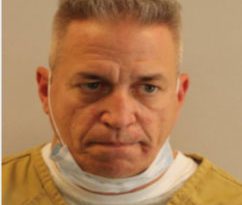 Man Jailed for Scamming Cold Spring Woman of More Than $103,000