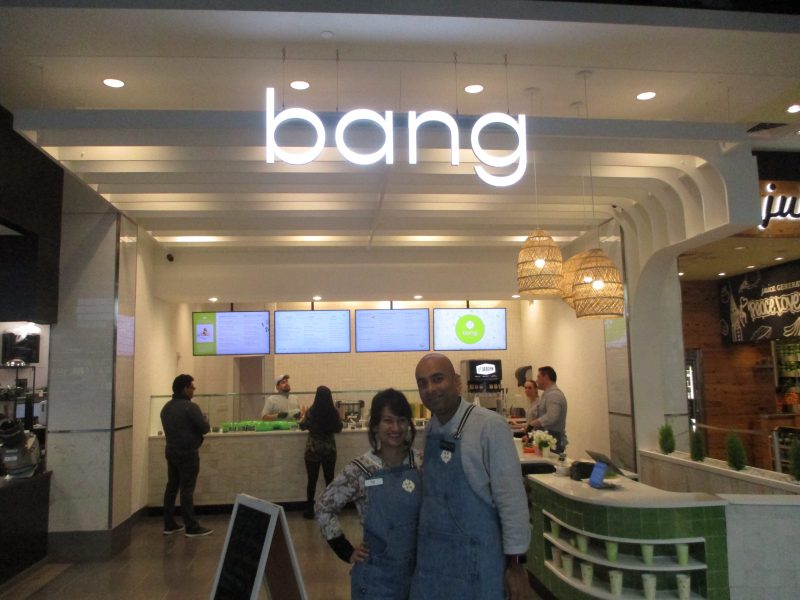 The owners of the new restaurant in the Savor section of The Westchester in White Plains gave their new business a simple name – Bang, for two reasons.

The husband and wife duo of New Canaan, CT residents Sharf Emdad and Tanjina Quazi, who opened Bang on Jan. 9, explained why they chose the name. “Bang, first of all, is short for Bangladesh, where we’re from originally,” Quazi said last week. “Then we just wanted to sort of open with a bang … It’s a fun name.”

“We’re offering Bengali-Indian fusion food for people who don’t like curry,” Quazi said. “It’s a very light, fresh food you can eat every day. Everything is grass fed, hormone free and anti-biotic free. And the reason we worked on this concept is because all the Indian food that we have currently available is something we normally eat at parties or at weddings, which is very heavy, very rich.

“There has been much fusion between Indians and Bengalis “who have traveled thousands of years in different parts of the world,” Quazi said. “It’s kind of a fusion of all those flavors.”

Some of Bang’s specialties include banana samosas, which are sweet and savory banana-filled puff pastry; coconut beef and butter chicken, Emdad said. “Everything here is made fresh every day,” Quazi said.

Though the Bang menu does not prominently feature curry, the eatery’s signature dish is jackfruit curry, Quazi said.

Aside from entrées, which include bowls and wraps, the menu offers such other selections as nitrogen-infused chai tea, and all-natural sodas

“Indian food has been a niche,” Emdad said. “We want an Indian food that is light.”  Emdad said the food served at Bang can be consumed without having to feel weighed down.

Quazi quipped that some people take Indian food and eat it in private “because it’s messy and you don’t know what is going to happen afterwards.”

Emdad said the couple has had the goal of providing healthy food in an affordable price range. There are limited options for purchasing healthy food on a limited budget, he said. He and his wife are more focused on how much food they sell rather than on the profit margins, Emdad said.

Quazi explained why she and her husband chose The Westchester to house their new business. “The Westchester has a great population, well-balanced and there’s a great clientele that comes through here,” she said. “It’s sort of a pilot for us to see how people like it.”

Emdad said he hopes to expand Bang through franchising. “We hope to open one to two units every year,” he said.

Bang is located in the Savor section of The Westchester, 125 Westchester Ave. in White Plains. For more information visit https://www.eatatbang.com/ or send an e-mail to tq@eatatbang.com or sharfemdad@banggrill.com.