Matthew Fiorillo was 16 when he first expressed an interest in becoming a funeral director. Perhaps it was his kind-hearted nature, his desire to help others or his willingness to reach out to people at the worst times of their lives. 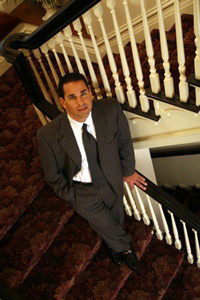 Whatever the reason, Fiorillo, a West Nyack native, is living his dream as president/owner of Ballard-Durand Funeral & Cremation Services, a staple in the White Plains community for over 70 years. The name, Ballard-Durand, comes from former owners Arthur Ballard, who purchased the building in 1938, along with his partner, George Durand.

From the outside, Ballard-Durand looks like other funeral homes in the area, but it’s the company’s efforts to create meaningful ceremonies to honor the lives of loved ones that set it apart from competitors, said Fiorillo. In many ways, explained Fiorillo, planning a funeral is similar to organizing other major events in life, except that in this case there’s not much time for planning.

That’s where Ballard-Durand takes over, handling a myriad of essential details that Fiorillo said allow families to focus on their own personal needs. Such details include the ordering of memorial cards, placing newspaper announcements, ordering flowers, and attending to the requests of family members and friends who have traveled long distances, often providing a concierge service that includes arranging hotel and car rental reservations or even recommending local tailoring and dry cleaning services, if needed.

Aside from offering the basic funeral services, such as removal to the funeral home, embalming and other types of preparation to the body, Ballard-Durand is also known for creating unique remembrances of the deceased. “In many ways, the easy part of what we do here is taking care of the body while the more difficult part is dealing with the families,” said Fiorillo.

Despite the delicate balance that Fiorillo and his staff must juggle, providing comfort on the one hand, and implementing a professional, yet well planned-out funeral service on the other, he also realizes that those extra few details can make all the difference in the world to a grieving family.

Memorial bookmarks, service programs, prayer cards and folders, all including a favorite photo, poem or prose tribute to the deceased, can mean a lot. Putting together treasured photographs and music to create tribute videos, which can then be shown during a memorial service and preserved later on CD as a family keepsake, are some of the ways that Ballard-Durand goes the extra mile, explained Fiorillo.

The creation of memorial websites and the live webcasting of funeral services, both at no additional cost to customers, is yet another service the company offers and that can’t be found in other local funeral homes, added Fiorillo, who holds an associate’s degree in mortuary science and funeral studies, and is also a certified funeral service practitioner, a voluntary educational credential that demonstrates that he has a lifelong commitment to the education and knowledge of the funeral industry and how to better serve  the community.

Although not as popular as a traditional funeral, Fiorillo said cremation is being considered more frequently these days. Fiorillo and his staff of four funeral directors subscribe to a 10-step policy designed to provide greater peace of mind for families. In addition, the cremated remains can be placed in an “Ark,” a specially designed carrier that takes the place of a coffin, adding dignity to any burial ceremony, he added.

“There are so many alternatives to planning a funeral,” said Fiorillo. “In fact, there are as many options as there are ways.”

Always attentive to his customers’ needs, Fiorillo has, for the past four years, been sending out surveys to families who’ve been served at Ballard-Durand. He said the results show a 97 percent overall satisfaction rate. He also hosts monthly grief support groups, led by a certified grief counselor.

Once a year, those same families can come back for one of the company’s most memorable events, the Annual Dove Release, a memorial service that is held in June and includes the release of approximately 20 doves, signifying closure for those who have lost loved ones, he explained.

The Maple Avenue funeral home, which has won the Pursuit of Excellence Award from the National Funeral Director Association for the past three years, is the only one that offers such services, said Fiorillo, and that also includes free funerals for the families of fallen police officers or firefighters in the White Plains area, “as our way of saying thank you,” he added.

Fiorillo said he’s happiest when he knows his staff has adequately comforted the families of the deceased. Offering a 100 percent service guarantee to all his customers, Fiorillo said, “I understand we don’t get a second chance to do this work well, and I stand behind our guarantee that if we don’t perform as we should, they don’t pay for it.”

For more information, visit the Ballard-Durand website at www.ballarddurand.com or call at 914-949-0566.