Skip to content
The Putnam Examiner
July 4, 2019August 17, 2019 David Propper
We are part of The Trust Project 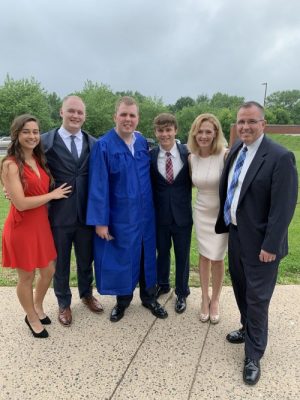 The morning of Jack Higgins’ graduation from Carmel High School, his mother, Barbara, asked her husband, Pat, whether Jack and the entire family should attend.

While it might be an odd question to pose in a family with a child about to celebrate a milestone, Jack has a form of severe autism that makes him incredibly sensitive to sound. Large events, like a graduation, might rattle him, leading to an outburst, which Barbara wanted to avoid.

But as an eight-year member of Carmel High School’s PACE program, June 20 was Jack’s time to graduate, and Pat insisted Jack have that experience. “My husband said, ‘we’re going, he’s got to have that experience, we need to have this experience,’” Barbara said. Despite Barbara’s trepidation, what happened once they arrived at Western Connecticut State University’s O’Neill Center could only be described by Pat as “an absolute home run.”

“We were unbelievably moved,” Pat said. “I know myself and my wife were kind of crying leaving the graduation.”

Two months prior to graduation, Pat and Barbara told Jack’s teacher that they would like to see their son walk at graduation. The teacher took their request to principal Lou Riolo, who spent time deliberating with assistant principal John Fink how Jack, with his sensitive ears, could participate without an issue.

Riolo, who has a daughter with down syndrome, understands that children with special needs and their families don’t get to experience everything most traditional families get to enjoy. But Riolo also knew it was his job to create a situation where Jack could be like everyone else for one day – on his big day.

And Riolo’s plan worked — with a lot of help from a thoughtful community.

“I’ve done this for a long time,” said Riolo, who has been principal for five years. “I’ve never seen anything more amazing than this.”

At the beginning of the ceremony, Riolo got on stage and asked the entire graduating class and their family and friends in attendance to “not clap and not cheer” so Jack could walk on stage first and receive his diploma just like his classmates would later that evening.

Jack, accompanied by his two brothers and his school aide, slowly walked across the stage in Carmel’s traditional blue robe with his hands near his ears and accepted his hard-earned diploma from Riolo. And then, almost in unison, members of the graduating class gave Jack a standing ovation without making a sound, with most in attendance shaking their hands back-and forth, which is clapping in sign language.

“What ended up happening was a miracle. It was a miracle because of everybody in that auditorium. They all took it upon themselves to make a difference,” Riolo said. “We shot for the moon and we hit the stars and that doesn’t always happen with a lot of things in life.”

Pat and Barbara were undoubtedly nervous before the ceremony and as they saw their son step up to accept his diploma.

When Pat saw the hundreds of people in attendance, he wondered how well Jack would handle it. When Jack gets upset, Barbara said, it can be a spectacle, and she didn’t want the day ruined for his classmates in the event something happened.

But Jack, like his classmates, rose to the occasion.

“I just didn’t expect it to be like that,” Barbara said. “No one made a sound, you could’ve heard a pin drop,” with Pat adding it was “dead silent.”

If anyone knows the character of the Carmel school system, it would be Riolo. He graduated from Carmel High School and after college, he returned as a high school teacher in the district before assuming the role as principal.

While getting students college and career ready is important for any school, Riolo said compassion is also an invaluable lesson to be learned.

“All the grades, all the successes, all the academic achievements, which are wonderful, I’m not negating it, but they get how to treat other people,” he said of his students. “And in this climate, in this country right now, that’s darn important.”

Pat called it a tremendous moment for the entire Higgins family to see Jack walk at graduation like everybody else. With the moment posted all over social media, Pat said he still gets emotional, even viewing more than ten times.

“I know myself and my wife were kind of crying leaving the graduation,” Pat said. “It was as good a thing as we’ve had in Jack’s entire life,” Pat said. “I think everyone was blown away with how special it was.”

School board president Rick Kreps, who has gone to every graduation since he was elected in 1999, couldn’t recall a graduation that was as heartwarming as this one.

“I think it goes to the culture of the students and the school community in Carmel,” Kreps said. “It is a special moment, but it does show the culture we have in Carmel. It’s really a proud moment.”

As Jack moves on to Ability Beyond in Chappaqua, he’ll be missed in the Carmel school community.

Barbara said those who come to know Jack always boast about how much they adore him. Part of the PACE program focuses on giving special needs students tasks to do within the school, so he’s met many staff members that he’s become friendly with, she said.

But there have been some challenges that come with Jack’s autism, like aggression, and Barbara admits there are many times it’s been difficult for her family to feel like part of the community because of Jack’s sensory issues.

“It can be isolating, but I never felt like such a part of the community than I felt that night,” Barbara said. “It was just absolutely heartwarming.”

Barbara added how she wishes she could give every graduating senior a big hug for the way they stepped up for Jack and her family that day.

“It’s something that my husband and I will never forget,” she said. “It was a beautiful night.”

Calls for Senior Center at Butterfield Loud, But Not Unanimous