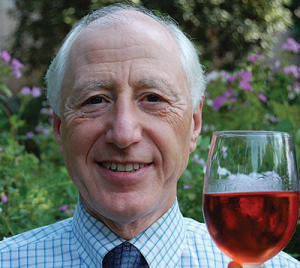 A Pinot Noir from California and one from the Burgundy region of France: the same grape, in many instances the same winemaking technique, perhaps even similar terroir.

Virtually simpatico in every respect, yet the aromas, flavors and, most notably, the overall experience are unique when comparing one to the other.

Many winemakers attempt to emulate France. Very few succeed. In my opinion, the wild card is not necessarily ecological or environmental but rather (pardon my Jesuit education) one of ontology.

In Burgundy, the influence of the local culture has overshadowed the environmental factors contributing to the Burgundy style of Pinot Noir. For centuries, well before globalization seeped into our diets and lifestyles, the evolution of local wine and food were intertwined.

Townspeople developed recipes based on what was available locally; what was available locally was determined by geography, weather and soil conditions. Thus, dishes like Beef Bourguignon were prevalent: local carrots, local beef, simmered in local wine, onions, mushrooms and herbs. To match the earthiness of the local beef and vegetables, what was desired was a balanced wine with similar earthy characteristics that would add to, not detract from, the richness of the stew. The local winemakers chose a grape and a style that complemented and enhanced their local cuisine.

Hence, the Pinot Noir grape was singled out and the Burgundian style of Pinot Noir wine was born. Winemakers brought their culture – family centric, peasant and agrarian psyche – into the winery. Although this is a simplification of an example of food and wine pairing, to this day, the Burgundian style Pinot Noir is favored internationally for game dishes incorporating rabbit, pheasant and lamb – all of which have roamed freely, side by side in Pinot Noir vineyards, for centuries.

However, in California, the evolution of Pinot Noir, which began in the late 20th century, has not yet settled into a long-term style. The wine seems to be evolving more on ecological and environmental factors than on any subliminal considerations. It is more a product of the land than of the psyche.

Another example of this cultural evolution of wine in support of local cuisine occurred in Tuscany and southern Italy. Let’s analyze the roots of its anthropology, oenology and viticulture.

Since the B.C. era of the Etruscans and early Romans, the cuisine was centered on local produce, cheeses and game. Early in the 18th century, the cuisine of these regions was forever changed by the widespread popularity of the tomato, brought from South America by the 16th century Spanish explorers.

Easy to grow in the terroir of small farms, and a natural complement to the existing cuisine, this fruit quickly became a staple in many Italian diets. Local herbs such as basil, parsley and rosemary were found to enhance its flavor. The richness and earthy flavors of local game proved to be a perfect pairing. Local home winemakers found that the tomato’s contrasting sweet and acidic flavors could be balanced by herbs and game. However, the local wines were produced to complement pre-tomato-based cuisine.

Adaptive Italians in Tuscany began a viticultural evolution, planting the Sangiovese grape. From this foundation, Chianti wine emerged as a distinct oenological style. Its balance of fruit and acid is a perfect complement to the richness and fatty texture of a Bistecca alla Fiorentina. Likewise, its slight fruitiness and soft tannins are a perfect complement to pasta dishes with tomato-based sauce.

Imagine a Tuscan farmer’s anthropological psyche: how to be self-sustaining while being one with the land and nature, combining his or her passion for food and wine with his or her passion for life, coaxing the land to be simpatico with their heritage. And then stepping outside the kitchen, gathering the matured crops from the backyard, sitting down with the family to a bowl of Penne a la Pomodoro and a glass (or two) of wine from their centuries-old cellar.

Ah, the ultimate expression of what we in the United States consider the “new” concept of “locavore.”

Nick Antonaccio is a 40-year Pleasantville resident. For over 25 years, he has conducted wine tastings and lectures. Nick is a member of the Wine Media Guild of wine writers. He also offers personalized wine tastings and wine travel services. Nick’s credo: continuous experimenting results in instinctive behavior. You can reach him at nantonaccio@theexaminernews.com or on Twitter @sharingwine.