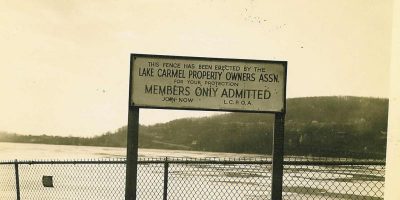 A celebration of the 90th anniversary of Lake Carmel will begin this weekend, with an exhibition of photos, artifacts and memorabilia rejoining in the area’s rich history.

Arts on the Lake, a non-profit organization that fosters the arts through performances, exhibits and classes at the Lake Carmel Arts Center in Kent, will kick off its latest event on Saturday from 1 p.m. to 4 p.m., with the exhibition continuing Sunday and over weekends through Dec. 12.

Visitors will be required to wear a mask upon entry and while viewing the exhibit, and social distancing will be in effect in compliance with state and local regulations, organizers said.

With Lake Carmel’s long history dating back to July 1930, the lake and surrounding community were developed by the Smadbeck brothers, who excavated and dammed a swamp in the 1920s and sold lots through the new-defunct New York Daily Mirror. Organizers said the brothers advertised and sold more than 12,000 lots, each 20 feet by 100 feet and a minimum of two was needed to build a cottage.

“Warren Smadbeck and his brother at the Home Guardian Co. were the original landowners, and they were often referred to as the “Henry Fords of the real estate industry” for their practice of buying lake-bordering tracts within commuting distance of large cities, subdividing them, building roads and selling the home sites through newspaper promotions,” event organizers explained. “They sold more than 700,000 lots in 30 states, where 75,000 homes were built.”

Furthermore, at one point, it was estimated the developments housed a permanent population of more than 500,000. Smadbeck died in 1965 at age 80; his brother, Arthur, died 12 years later at 90.

Today, Lake Carmel is a vibrant hamlet in Kent, and is home to over half of the town’s 8,282 population, centered around the 1.6-mile-long manmade lake in the southeast corner of the township.

Residents who are is interested in exhibiting historical photos or small artifacts, are asked to contact Lake Carmel Advisory Board member Walter Recher at wrecher@verizon.net. Arts on the Lake is located at 640 Rte. 52 in Kent.