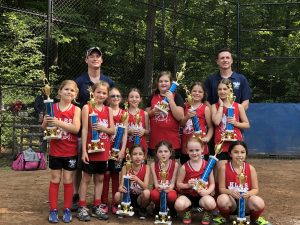 The KLBS Angels squeaked out a narrow championship game victory on Saturday, beating the Royals in a fierce 1-0 battle of second and third grade softball players at Rasor Field in Katonah.

Angels coach John Foote cited the play of Elise Templeton, who made two key outs in the first inning with the bases loaded to prevent the Royals from scoring. It was only fitting that Templeton was the one to close out the game by tagging out the base runner at first, Foote noted.

“The Angels had a great season from start to finish,” the coach observed. “The girls were great teammates to one another and really worked hard to improve in all facets of the game throughout the season. During the regular season, scoring runs was a strength of the team. So to watch them play a clean game defensively to win a close and thrilling championship game was wonderful to see.”

Royals coach Michael Hopkins was proud of his players, predicting big things ahead for the budding athletes.

“The championship game was truly a great battle between two teams with smiling faces on a beautiful day for softball,” Hopkins said. “A defensive gem by both teams kept the score at 1-0 throughout with unbelievable plays on both sides of the ball. The Royals may have ended their season with a loss, but the future is bright for the young KLBS girls who got better every game this year.”