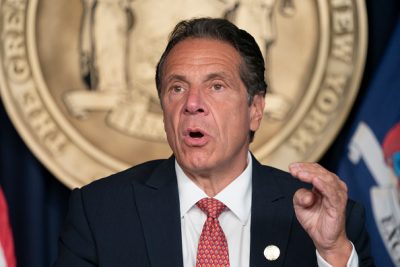 I had come home from a lunch date with a friend to learn that Gov. Cuomo resigned. I remain beset, to be perfectly honest, with competing feelings of relief but also with a “better-the-devil- you-know” feeling swirling in my chest. His downfall promises plenty of challenges down the road. I’m grateful for Lt. Gov. Kathy Hochul’s rise in the interim and guess we shall see how the political landscape unfolds.

Nonetheless, it was ultimately the right thing to do, and I found his resignation speech far more appealing (even if it was a result of having your back against a wall) than his initial rebuttal to the attorney general’s report.

I have a daughter and niece, too, in the same general age group as the governor’s daughters. His words to his daughters were especially welcome – a wish for them to have wings to take them as far as they can go.

Sure. That resonates and I hope that they “hear” their dad; there is no doubt that they are reeling with pain they don’t deserve over their father’s downfall and precarious legal situation, so I wasn’t surprised at all to hear him address them directly. Their lives have been terribly and unfairly impacted, and a repair to his relationship with them was likely necessary, too. I believe the governor when he states that he wants the best for his daughters.

But if I may dig a little deeper at the risk of personally offending, yes, the governor, and many others – mostly men – I’m afraid, because it’s just THAT important, and change needs to come for a better future for all our daughters.

I have another wish, too, for young women, everywhere – that they ALL believe their brilliance and talents are real and authentically valued at every age, even after being hit on for sex, and that they don’t grow older feeling that their attractiveness and worth dissipate with age, either.

Beyond Gov. Cuomo and this sad chapter, my even greater wish is that society, men and women alike, stop glorifying youth and treating older women as the most dispensable of anyone. Meanwhile, older women, our lines, our expressions, the gleam in our eyes, are every bit as beautiful and compelling as an older man’s.

Gov. Cuomo had an undeniable fan club around the country, heck, around the world, of beautiful, brilliant women in his general demographic crushing on him so bad (guilty as charged!), many considerably younger, but apparently not young enough. He made his lust for a much younger partner very clear, asking one of the young women he allegedly harassed to fix him up with someone his age, and that he could go as young as 22. Given everything I’ve read now, I doubt he was joking.

Love is love for sure, but this predatory quest by older men for much, much younger women smacks of misogyny, too, and puts young women at risk. This is my own humble opinion and not true across the board, and if I offend anyone in a relationship with a massive age gap (let’s say more than 20 years for the sake of argument), I apologize.

However, this lust ultimately infects the way both young men and young women view gender and gender “worth,” so I take that very seriously, and I think it’s worthy of discussion.

Not too long ago, I read a tweet from a young lady, one much too young to be asking wistfully why men are so much hotter than women as they age. It upset me, both as a woman and a mom, and so did the many comments and pictures of silver-haired dudes posted to support that point of view. I saw few, if any, comments about or pictures of gorgeous, equally dignified older women to counteract that, and it made me sad. I could only conclude that people really believe this.

News flash: Men DO NOT look hotter than women as they age. Their new lines are just as creviced and crooked. Their additional belly roll is just as roly-poly. Andrew Cuomo is no more handsome than women his age, either. We are just conditioned to believe this is true. And Andrew Cuomo has been too.

“Men age better,” “men look better,” “men are hotter” are just that, myths promoted by – shocker – men, on some level, trying to maintain power and control over women, over many things, whether from your living room or in Hollywood.

Collectively these myths tragically make older women FEEL invisible and less significant. Our sense of self-worth is chipped away by these myths. If men are hotter, then of course there will be more leading roles for men and far fewer for women. Then, of course, men in power will feel entitled to go after younger women. And on and on.

Myths embraced create privilege and actual real-life opportunities. Men in power come to believe these myths, too; the so-called alpha guy, in particular, will feel entitled to his just desserts, especially after he has tasted a few by young women, who may be conditioned just like the young lady who tweeted that old men deserve it all.

I have probably gone way off tangent here in this feminist take regarding the governor’s resignation, and the events leading to it. But I’m viewing his resignation as a visit from an older karma.

A massive ego and a sense of entitlement are at the heart of Gov. Cuomo’s downfall. He is a man who could have had anyone, been with anyone. Full stop on that, Andy. And he would have been much better off for it than choosing to go after women far too young for him. New York and its residents would have been, too.

Grace Bennett is publisher and editor of Inside Press Magazines, based in Chappaqua, N.Y.

Slow and Steady Wins the Race

Lack of Information on Pediatric Nursing Home During Crisis is Disturbing