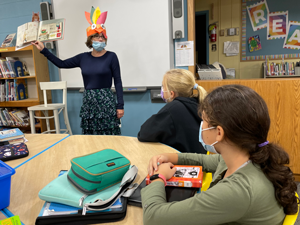 In a week when many families might tune in to the Macy’s Thanksgiving Day Parade, Carole Garcia donned a festive turkey headband and read a book about the history of the parade to a class of fifth graders.

“Balloons over Broadway” by Melissa Sweet tells the story of the early years of the Macy’s Thanksgiving Day Parade and the puppeteer who created its iconic helium balloons.

“How many of you know what a marionette is?” Garcia, the Library Aide at Fulmar Road Elementary School, asked the students from Thomas Jordan’s class.

Almost all of the students raised their hands.

“And you know how they move, right?” Garcia asked.

“Yes,” the children answered. “By strings.”

There’s no surprising fifth graders these days. Still, the children sat quietly, completely taken in by the story they were hearing and the idea of character balloons flying higher and higher above the streets of New York City.

After the book was done, the class discussed the assignment their classroom teachers had given them — to write a story from the perspective of one of the balloons in the parade.

“I’m writing a story and saying how it felt to her to be up that high looking down at the world and all that she saw,” Delilah said. “I’m drawing pictures too.”

For some of the students, the exercise quickly turned into science fiction. Jake didn’t want to write about just one character.

He said he would write about a mix of Baby Yoda, Boss Baby and Ronald MacDonald.

“I’d like to combine them,” Jake said. “I’d love to make that abomination. He’d fly high. Then he’d look down and see a hundred million tiny humans.”

It may not be a classic Thanksgiving tale of Pilgrims and Native Americans celebrating a feast before winter, but the creative balloon combo gave the 10-year-olds something new to think about as they prepared to celebrate the traditional American holiday.

Forging community in Westchester with thoughtful local journalism — one deep dive at a time.
• A "Disposable" Income
• Our Best Bets for This Weekend (and Beyond): What to Do and Where to Go
• Art Attack
• Too Cool for School (Applications)
• Mac & Cheese? Yes, Please!