Ghosts, goblins and ghouls – oh my!

Little witches and warlocks throughout the county are preparing to hit the streets for candy this Thursday for Halloween.

Whether you’re new to your neighborhood or just want a new trick-or-treating experience, here is a list of suggested locations.

The Examiner crowdsourced areas and suggestions via social media, local police departments and town halls, used word of mouth and google maps and canvassed a few neighborhoods to compile the list.

When determining what would constitute a good trick-or-treating area, safety, walkability, decorations, local popularity and, of course, candy were considered.

Have a happy and safe Halloween!*

Located off Route 22, Windmill Farms Road and the surrounding area boasts plenty of homes to visit. The neighborhood is not inundated with traffic and has wide roads for children to walk along. Stay along the roads that serve as a perimeter to Windmill Lake, including Maple Way and Upland Lane.

“I grew up in Windmill Farms and we always had a great Halloween,” said former Armonk resident Jill Berman.

The Farms Road, off of Old Post Road near Bedford Ace Hardware, was overwhelmingly named the hot spot of the Bedford area. There are plenty of kids roaming the long, winding street, and the Bedford Fire Department brings its truck to the corner of The Farms Road and West Circle to light up the night for all the trick-or-treaters.

“The fire department lights up the street, and it’s a very popular spot,” said Sgt. Patricia McGraw of the Bedford Police Department.

The neighborhood located off of Pleasantville Road between Route 9A and the Taconic Parkway, known as “the tree streets,” is a popular Halloween haunt. The streets between Ash and Larch roads have sidewalks and houses within a few steps of each other.
Trick-or-treaters tend to start on Ingham Road, by Todd Elementary School. After finishing Ingham, they cross over Pleasantville Road and continue to the streets between Ash and Larch.

Should you have accumulated too much candy, Briarcliff Center for Esthetic Dentistry is a candy drop-off location. Briarcliff native Dr. Michael Teitelbaum and his staff, located at 1312 Pleasantville Rd., will buy back candy from children for a dollar a pound, and then send the candy to American troops overseas.
This is the 17th year of Teitelbaum’s effort, and according to his front office staff, the reception area overflows with sweets.

Families can drop off the candy up to three weeks after Halloween. For more information, visit www.dentistspa.com.

Besides the hustle and bustle of regular business, downtown Chappaqua merchants host their own trick-or-treating event. From 1 to 5 p.m., trick-or-treaters can stop at the various shops located on North and South Greeley avenues, which is easily accessible via the Saw Mill. Merchants such as Villarina’s Deli, Desires at Mikolay and Pizza Station all take part in the event.

Whispering Pines of Chappaqua, a flower shop, boasts an especially spooky storefront. Little ones are welcomed by pumpkins, witches and ghosts as they enter the store to get candy.

Off of West Stevens Avenue, the streets located between Marietta Avenue and Warren Avenue provide the perfect place to trick-or-treat. Four streets sit between, including Willis, Manhattan and Sherman avenues, with plenty of houses in the neighborhood.

Chase Homes, which runs the entirety of Carlton Drive, is a long, winding street located off of Stratford Drive that can be accessed via Route 172.
The road has only two entrances, which limits through traffic, and has plenty of doorbells for the kids to ring.

According to Pleasantville resident Kerry Win, Edgewood Avenue is known as “the haunted house street.” Residents go all out with decorations, and because so many children flock to the area, people throughout the village donate candy ahead of time to residents there.

Stay in the triangle of Washington Avenue, Edgewood Avenue and Great Oak Lane, which has sidewalks.

The area behind Rose Hill Shopping Center is an ideal place to take trick-or-treaters. While Nannyhagan Road is a busy street, there are plenty of nearby streets that provide safe, well-lit areas for children. Take Swanson Drive and continue to Orchard, Highland and Andrea Lane. These streets are lined with plenty of houses close together, making it more manageable for children. Make sure to be careful if crossing Westlake Drive, a busy two-way street.

Located off Legion Drive, this neighborhood is between Entrance Way and Wilson Avenue. Bordered by one main road, the traffic going in and out of the neighborhood is light, which makes it safe for families to walk through. There are plenty of houses in the area, so bags can fill up fast.

Dalyssa Hernandez, who grew up in Valhalla Park, recalled how much candy she used to collect.

“I remember having to stop at home in the middle of the evening to grab a second bag to fill,” she said.

*Note: The Westchester Examiner is not responsible for any sugar highs or cavities your little ones may incur. 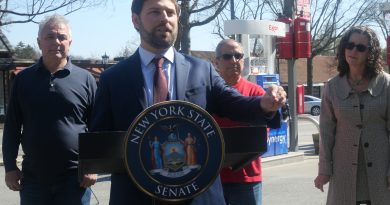