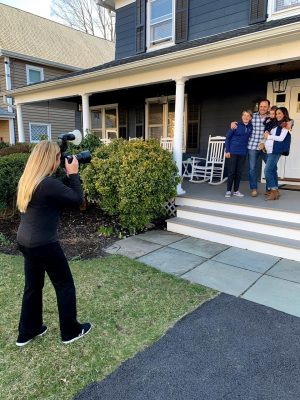 Donna Mueller photographs a Pleasantville family as part of the Front Steps Project. Mueller asks for a donation from the families and businesses she photographing to be used to buy gift cards from local businesses and donate them to those in need.

Photographer Donna Mueller is encouraging families to sit outside their homes and be photographed from at least six feet away.

Mueller has brought the Front Steps Project to her home community of Pleasantville and the surrounding area. She was inspired by an article about a Boston-based photographer last month who started taking portraits of families on their front steps – from an appropriate distance – once her jobs dried up due to the coronavirus pandemic.

Mueller re-posted the article on Facebook and is now offering a similar service.

Instead of asking for money, Mueller recommends that people buy gift cards from local eateries and other businesses and give them to someone in need.

What began as a small project has turned into numerous requests throughout the village and Mount Pleasant to help others during the current crisis.

“I really originally wanted to keep this to a small number of families,” Mueller said. “But I’ve gotten inundated with requests and I really don’t want to leave anybody out.”

Earlier this week, Mueller said about 80 families had already had their portraits taken. To keep organized, she has developed a spreadsheet so that she can split the families up by their respective neighborhoods. She takes photographs of 25 families a day and was on track to have captured images of around 150 families by the end of this week.

Once she arrives at someone’s house, she texts them to come outside and does not break any social distancing rules. Mueller stays at least six feet away, but is usually positioned further, often about 10 to 20 feet from her subjects.

Many families have chosen to incorporate signs into their portraits, Mueller said. Rainbows have become a popular sign because Bedford Road School Principal Peggy Galotti encouraged children to draw them and put them in their front windows. When people go outside for their walks, they can look for the rainbows to brighten their day.

Some of the other signs praise healthcare workers or encourage people to stay safe and healthy, she said.

“So I show up to the house and they come out and I take a couple shots and then they get a beautiful family shot and there’s no charge; I don’t make a penny off this,” Mueller said. “In exchange for the picture, they just agree to do something kind and support a local business.”

Some of the families that have been photographed have donated far more than the suggested $25, she said. When they order takeout, they have the opportunity to buy a gift card that they can pay forward by giving it to someone else in need.

Families are also welcome to give the gift cards to Mueller, who donates them to organizations like the Red Cross and Feeding Westchester.

“People don’t have to buy a gift card,” she said. “They can donate to whatever they feel they want to support at this time.”

Mueller, a self-taught photographer, started her career seven years ago, taking pictures at her children’s sporting events and gradually expanding her portfolio to family portraits and other events. She has always been passionate about giving back to her community and saw the Front Steps Project as an opportunity to use her talent to help her neighbors through the COVID-19 outbreak. She also encourages others to assist those who are less fortunate.

Mueller is trying to find the bright side to the current crisis.

Next week, Mueller will reach out to the Pleasantville Chamber of Commerce in hopes of taking photos of merchants outside of their businesses. She hopes to spread word on social media platforms that these local businesses are open for business.

For more information about the Front Steps Project, contact Donna Mueller at www.greatkeepsakes.com or on her Donna Mueller Photography Facebook page.