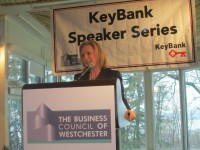 Senator Kirsten Gillibrand (D- Brunswick, N.Y.) told members of the Business Council of Westchester last week that despite the stalemate in Congress she thinks that by focusing on issues that have bipartisan support the lawmakers in Washington D.C. can break through the gridlock and help revive the economy.

“We see constant and endless bickering,” Gillibrand, who is the junior senator representing New York, said. “What we want out of our government is a government that works for everyone. So as we combat this jobs crisis what we really need is a refocused effort on what brings us together.” She cited some of the common core values as infrastructure, corporate tax reform and national security.

The senator reminded the audience of business and government leaders that while infrastructure is often called a Democratic issue it was President Dwight D. Eisenhower, a Republican, who created the national highway system. Then it was President Ronald Reagan, also a Republican, who reinvested in it. “It is really a bipartisan idea that has strengthened America for decades,” Gillibrand said.

“What that would look like is a way to create public-private partnerships where large scale, long term significant projects of infrastructure could be funded by the private sector with a small amount of seed money or loan guarantees funded by the government,” she said. The bank, which would be managed outside of the political process, much like the federal reserve, would approve projects such as high-speed rail lines, roads, bridges or an electrical grid.

“You would have advisors who look at these projects and fund them regardless of the political cycle, regardless of the appropriations process, and that would make an enormous difference,” Gillibrand said.  “If you had that funding vehicle with the private sector, where a pension fund or life insurance company would say, ‘I want to have a 30-year investment that is going to have X return rate and this investment is going to deliver that for me,’ you would get a lot of capital that is sitting on the sidelines of our economy today be reinvested in America.”

Marsha Gordon, president and C.E.O. of the Business Council of Westchester brought up the Tappan Zee Bridge. “We need the funding for that now,” she said.

While Gillibrand said that the possibility does not exist now for the public-private partnership, President Obama has marked the bridge as one of national significance and it is listed as a project that should receive funding.

John Ravitz, a former state assemblyman, asked about mandate relief. The senator said that finding ways to fund infrastructure projects that would otherwise have to be funded through local municipalities is providing property tax relief. Otherwise the local governments would have to raise property taxes in order to pay for the infrastructure needs, she said.

Gillibrand acknowledged, “Washington does not understand how business actually works. They just don’t get it. We also have to look for easy ways to make companies be more efficient.” She suggested that tax policies are one way that Congress can assist businesses. Gillibrand thinks having long-term plans and tax credits will help the private sector. Business owners will not have to worry about whether each Congress is going to pass a short term fix.

“Thirty years ago the U.S. was the global leader in tax policy and that encouraged innovation,” she said. “Today we sit at number 17, opening doors for countries like China and India to begin to push ahead.  I think we need to be very aggressive on tax policy. It helps us re-invest, it helps us in research and development, it helps us innovate.”

Overhauling the corporate tax code Gillibrand thinks is a possibility in Washington. “There is a lot of bi-partisan interest in corporate tax reform because there is a simplicity out there that is very attractive to business,” she said. “If you could zero out all deductions in exchange for a lower rate that is 20 to 25 percent… you put the U.S. corporate tax rate right in the middle of the international tax rates, which makes us far more competitive in the world markets we are in. If you could do that in exchange for no deductions it may be worth it for businesses.”

Gillibrand sits on the Senate’s Armed Forces Committee. She warned the budget cuts in defense may have an effect on the military bases in New York. The federal government will look to close National Guard bases, such as Camp Smith in Cortlandt, before closing active military bases. “This could have a huge impact on the New York economy,” Gillibrand said.

Concerned about national security, the senator also brought up the possibility of Iran having the capability to create nuclear weapons. She said that both parties in Congress are worried about Iran and that they are working together to push for crippling sanctions for the country.

“Iran says its uranium is for peaceful means, but they won’t let anyone prove that,” Gillibrand said. “It is a huge risk to America. People look at a nuclear Iran as an existential threat to Israel, but make no mistake it is also an existential risk to the Unites States. The likelihood of a dirty bomb being set off in New York City, or in a shopping mall or in a stadium escalates if Iran has nuclear weapons.”

The recommended sanctions, which Gillibrand considers aggressive and meaningful, are meant to give the Iranian people a choice. “Either be part of the world economic community and overturn the current government or suffer the consequences of being closed out from the world economy,” she said.

Gillibrand is running for re-election for what would be her first full term as a senator. She was appointed as a senator in January 2009, filling the seat of current Secretary of State Hillary Clinton. In November 2010 she won a special election to the seat. Prior to becoming a senator Gillibrand was a member of Congress. She was the representative for New York’s 20th Congressional District.