Skip to content
The White Plains Examiner
January 11, 2014 Pat Casey
We are part of The Trust Project

In a joint press release issued Friday County Executive Robert P. Astorino and Chairman of the Board of Legislators Michael Kaplowitz announced agreement on $274 million in vital public infrastructure investments.  According to the press statement the investment represents an increase of $86 million over what was invested last year. Hundreds of jobs will be created to complete the infrastructure improvements to buildings, roads, bridges, the airport, transportation and the sewer and water districts, as well as funding for a variety of technology upgrades and renovations to county parks.

“These are solid investments that strengthen the county’s assets and create hundreds of jobs, and I want to thank Chairman Kaplowitz for his leadership in pledging to move these projects forward expeditiously,” said Astorino. “By working together, we can speed the benefits of these projects to residents and businesses.”

Kaplowitz added, “The Board of Legislators is committed to working with the administration to move these capital projects through the approval process quickly. We’ve established a new committee structure that will allow us to perform our oversight functions in a more effective and timely way.”
Astorino made the capital projects announcement at the Westchester Business Council’s 2014 KeyBank breakfast at Tappan Hill in Tarrytown on Friday morning. The largest road and bridge projects include the rehabilitation of the Ashford Avenue Bridge in Ardsley and the Fulton Avenue Bridge in Mount Vernon and Pelham Manor.There is $31 million planned for the Parks and Recreation Department for projects that include improvements and renovations to the Maple Moor and Dunwoodie Golf Courses, the County Center, Lasdon Park and the North and South County Trailways.  There is also ongoing restoration work taking place at Playland Park to make repairs to the Boardwalk and Ice Casino, which were damaged by Superstorm Sandy.

The $25 million being spent at the airport will go toward upgrades at the airport terminal systems including airport approach protection, electrical system upgrades, heavy equipment acquisition, repaving of the asphalt surfaces, natural gas pipeline, runway safety improvements, and improvements to the water supply system.

The 2014 sewer improvement projects include: $82 million for the construction of a pumping station in Eastview and $24 million for the engine and boiler replacements, HVAC, odor control and other upgrades to the Yonkers Joint Wastewater Treatment Plant. 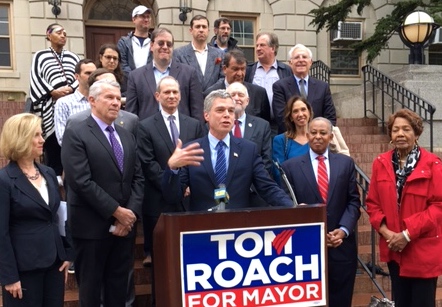