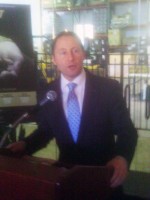 County Executive Rob Astorino at the Captain Lawrence Brewing Company on Monday to tout a new campaign to entice businesses to Westchester.

A new pamphlet from the Westchester County Office of Economic Development is titled “Grow,” with a front cover photograph of a person holding a patch of soil with a small plant.

On Monday, county officials touted their efforts to grow businesses in Westchester. It is part of a new marketing campaign to promote Westchester as fertile ground for businesses by focusing on the success stories of existing businesses.

The event to kick off the campaign was held on April 2 at the Captain Lawrence Brewing Company in Elmsford. Its’ owner, Scott Vaccaro, a county native, said while he was trained as a brewer in California, he had every intention to return home and create a business in Westchester.

“When the time came to set up shop, there was no place else that I would even think about doing it,” he said. “Not only is it home, but Westchester County is so unique in where it is geographically The people who live here seem to appreciate fine food and definitely fine beer.”

County Executive Rob Astorino said Captain Lawrence, which relocated from Pleasantville to Elmsford in the past several months, began 17 years ago with five gallons of beer made in Vaccaro’s kitchen. It is now among the top 50 breweries in the United States.

“Tonight really is about taking the next step in Westchester County’s economy,” Astorino said. “The people who are showcased in our series of ads here are with us tonight. And they’re with us to share their success stories. We’re very proud of them.”

The new pamphlet compared Westchester to an economic garden, a successful concept in other parts of the country, Astorino said. He said it’s critical relate the success stories in hopes of encouraging other entrepreneurs that they can grow their businesses to the next level with a business-friendly county government.

“Much of the day-to-day assistance we provide is in the form of guidance,” Astorino said. “We can help find resources that people may not know about as quickly as possible, whether it’s in financing or mentoring or even networking. And we certainly don’t have all the resources, or all the dollars, but we can find out who does and we can create those unique partnerships that could work.”