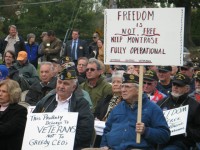 Veterans have been outspoken against any development plans at the VA Hospital in Montrose.

It looks as though Cortlandt officials and veterans groups have temporarily won the battle to preserve services and protect the land at the Franklin Delano Roosevelt VA Hospital in Montrose from being developed.

Cortlandt Supervisor Linda Puglisi received notice last week that authority given to the federal Department of Veterans Affairs from Congress to lease land or buildings to public, private or non-profit partners expired on December 31, 2011.

Without further approval from Congress, the Department of Veterans Affairs is forbidden from moving forward on 17 projects, including the VA campuses in Montrose and Castle Point, located near Monticello.

“We are all very pleased that at this time no EUL (Enhanced-Use Lease) decision was made and that this unfair plan has expired,” Puglisi said. “However, we will continue to monitor and oppose any future plans for another EUL, or something similar to make sure that our veterans are served with the current services and that there are increased services at this location, as well.”

William Nazario, a Vietnam veteran and chairman of the Cortlandt Hudson Valley Veteran’s Committee who has traveled to Washington D.C. to lobby for the preservation of the VA Hospital in Montrose, said they can’t let their guard down.

“Even though the EUL has expired we will always maintain vigilance on the Hudson Valley Healthcare System due in part to economic times and Washington’s budget balancing,” Nazario said.

Since 2004, federal Department of Veterans Affairs’ officials have been seeking to downsize services in Montrose and relocate them to Castle Point and Nyack. Plans were also unveiled to have 400 housing units built on 160 of the 172 acres, along with a downgrading of medical, physical and psychological services.

New York State ranks #6 in the nation in terms of its veterans’ population. The VA Hospital in Montrose ranks #1 in the United States among veterans hospitals for treating veterans with post traumatic stress disorder.

Cortlandt officials have held many large rallies in front of the VA in Montrose. Last summer, Congresswoman Nan Hayworth (R-NY) introduced a bill, called the Hudson Valley VA Health Care Campus Protection Act, which sought to protect the Montrose and Castle Point campuses, both located in the 19th Congressional District, from being sold, lease or disposed of.

“Our veterans throughout the years have bravely defended us and now we must continue to defend them,” Puglisi said.