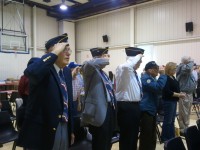 Veterans were among those who vowed to fight for the VA Hospital in Montrose.

Any development at the Franklin Delano Roosevelt VA Hospital in Montrose may currently be on hold, but local veterans and officials remain on guard to ensure services there remain intact.

“We have no victory yet. The victory will come when they put those buildings back in use and increase services for our veterans,” William Nazario, a Vietnam veteran and chairman of the Cortlandt Hudson Valley Veteran’s Committee, said during a Memorial Day ceremony at the Muriel Morabito Community Center in Cortlandt.

“If we allow these services to be cut, what lesson are we showing our young people? You can go to war but when you come home nothing will be here for you?” said Nazario, a Purple Heart recipient who recently received a Volunteer of the Year award from the VA. “We should not support officials looking to balance the budget by selling out the VA.”

Since 2004, federal Department of Veterans Affairs’ officials have been looking to downsize services in Montrose and relocate them to Castle Point and Nyack. Plans were also unveiled to have 400 housing units built on 160 of the 172 acres, along with downgrading medical, physical and psychological services.

Earlier this year, Cortlandt Supervisor Linda Puglisi received notice that the authority given to the Department of Veterans Affairs from Congress to lease land or buildings to public, private or non-profit partners had expired.

The VA Hospital in Montrose ranks No. 1 in the United States among veterans’ hospitals for treating veterans with post traumatic stress disorder.

“Not all wounds are visible,” Nazario said. “There are many men who may not have suffered a gunshot wound, but come home with scars, scars that they live with at night. The cause of the VA and Castle Point is about serving our veterans.”

Guest speaker Lt. Col. Richardo Singleton of the U.S. Army, who has served in conflicts in Iraq, Bosnia and Afghanistan among others, said being a veteran means putting your country ahead of everything else.

“I’m willingly ready to do it again if my country asks me,” said Singleton, a resident of Peekskill who has two Bronze Stars. “One of the things veterans enjoy is that we’re just thought about. When they come home they need someone to say thank you.”

State Assemblywoman Sandra Galef (D-Ossining) said Memorial Day is a day for Americans to reflect on the men and women who gave the ultimate sacrifice.

“What these soldiers have done should never be forgotten,” Galef said. “We owe them no less than this day. They are some of the greatest heroes we will ever know.”

Cortlandt will be holding a rally on Flag Day, June 14 at 3 p.m. outside the VA Hospital in Montrose to continue calling attention to the services veterans rely on at that facility.