Skip to content
The Northern Westchester Examiner
April 15, 2014 Rick Pezzullo 361 Views 2 min read
We are part of The Trust Project 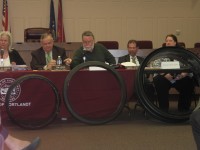 Two separate projects proposed on a 100-acre former quarry site in Verplanck involving a gas transmission line and a high voltage converter station have officials and residents in Cortlandt fired up.

“Enough already!” Cortlandt Supervisor Linda Puglisi remarked about the abundance of facilities in the Verplanck area, a hamlet with about 1,700 residents. “We have fought other challenges in our community. We don’t give up.”

The Spectra/Algonquin Energy natural gas pipeline project would have a 42-inch transmission line run underground from Verplanck to Stoney Street in Yorktown, near the BJ’s Wholesale Club shopping center. Part of its route would pass near historic St. Patrick’s Church and Buchanan Verplanck Elementary School, and homes on Justin Court and Peachwood Drive off Croton Avenue, and through Blue Mountain Reservation.

“This is not just an issue with Verplanck. It’s an issue with the entire town,” said Bernie Vaughey, an engineer and chairman of the WPP/Spectra Task Force in Cortlandt who explained the pipeline would carry fracking gas with unregulated material.

Another member of the task force, Jim Bell, mentioned the 60 to 80 gas pipeline explosions that occur annually in the United States.

“Why should we be concerned? The problem with natural gas pipelines is they can be extremely volatile,” Bell said. “When things go wrong with a pipeline of this size they go bad, and they go real bad. What Spectra is proposing, they really need to think about what they’re putting in.”

The pipeline falls under the jurisdiction of the Federal Energy Regulatory Commission, whose authority supersedes town regulations. The pipeline is looking to be in place by November 2016.

Equally disturbing to the town is a plan by West Point Partners LLC , which falls under the auspices of the New York State Public Service Commission, to construct a 1,000 megawatt high voltage converter station with buried high voltage cables behind Letteri Field on Broadway and 11th Street.

The building for the station would be 49 feet high, equal to the size of two Best Buy stores at the Cortlandt Town Center, with lightning rods almost 80 feet high. The facility, which would only employ four to six workers, also generates a constant buzzing sound that can be heard over railroad and airplane noise, as some Cortlandt employees experienced during a tour of a similar station in Hicksville, Long Island.

“It’s obvious that’s the end game with West Point. They want to close Indian Point, where there’s 2,000 jobs,” she said. “It’s not a positive for our communities.”

“It really is a monstrosity that we really can’t allow here,” said Rosemarie Muscolo, a 26-year Verplanck resident and member of the task force. “”Whose neighborhood is next?”

The Public Service Commission will be holding an informational and public hearing on West Point Partners’ project on Wednesday, April 30 from 2:30 to 3:30 and 6 to 7 p.m. at the Muriel Morabito Community Center on Westbrook Drive.

‘Take a Stand’: Galef Calls for Removal of Trump Name from State Park