Local elected officials criticized the federal government for approving the expansion of the Algonquin Pipeline project that will run through Cortlandt, Peekskill and portions of Yorktown.

Cortlandt Supervisor Linda Puglisi said she was “angry” that the Federal Energy Regulatory Commission (FERC) ignored virtually all of the concerns raised by municipal officials and citizen opponents and gave Spectra Energy Corporation the green light to move forward only six weeks after the Final Environmental Impact Statement (FEIS) was submitted.

“It seems like it was a done deal before we even (spoke out) with our concerns and issues,” Puglisi remarked. “It’s extremely frustrating and very disappointing. We don’t feel our questions have been answered. We don’t feel we were listened to. For FERC to make this decision prematurely is not fair to all parties involved.”

County Legislator Peter Harckham (D/North Salem) was equally annoyed with FERC for seemingly ignoring an environmental assessment of the pipeline expansion on Blue Mountain Reservation that it was given in January.

“By summarily approving the risky gas line project, the Federal Energy Regulatory Commission has shown that it is deaf to the valid concerns of residents and elected leaders, who simply asked for a more stringent review before letting Spectra move ahead,” Harckham said. “I’m disappointed and frustrated that a good deal of effort and energy went into identifying serious questions regarding the pipeline that they (FERC) apparently don’t feel need to be answered.”

Spectra Energy’s project that would run from Stony Point, under the Hudson River, through Peekskill, Cortlandt, portions of Yorktown and into Southeast, Connecticut, Rhode Island and Massachusetts. The proposal would remove an existing 26-inch gas pipeline and replace it with a 42-inch one. The gas pressure would also increase by 25%.

“That is wherein lies the real problem, and the construction,” Puglisi said of the increased pressure. “We’ve been fighting this for two years.”

Opponents of the pipeline presented FERC with a petition containing more than 26,000 signatures at a public hearing last year in Cortlandt. Many raised concerns about the pipeline, which has been located in the area for more than 50 years without incident, sitting 1,500 feet away from the Indian Point nuclear power plants in Buchanan.

In the 66-page decision it released Tuesday, FERC appeared satisfied with the measures Spectra proposed for the pipeline near Indian Point in its FEIS, stating, “The NRC (Nuclear Regulatory Commission) concluded that a breach and explosion of the proposed 42-inch diameter natural gas pipeline would not adversely impact the safe operation of the Indian Point facility.”

County Board of Legislators Majority Leader Catherine Borgia (D/Ossining) said FERC failed to address requests made by officials that an independent health analysis be conducted concerning the pipeline’s proximity to Indian Point.

“I am more than dismayed that all our reasonable requests have been ignored by the agency charged with regulating the energy industry,” Borgia said. “Because accidents involving gas pipelines do occur, sometimes with catastrophic results, I would think that a lot more due diligence would be put into this process before an approval was granted.”

Since the federal government supersedes municipalities, Puglisi, who noted Cortlandt spent approximately $300,000 opposing the pipeline, conceded it was unlikely an appeal would be successful. She called on local state and federal elected representatives to speak out.

“We are the low people on the totem pole,” Puglisi said. “We need state and federal people to help us. We have fought many obstacles over the years. We have been successful on most of them. There are so many questions still outstanding.” 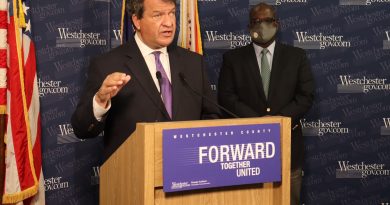