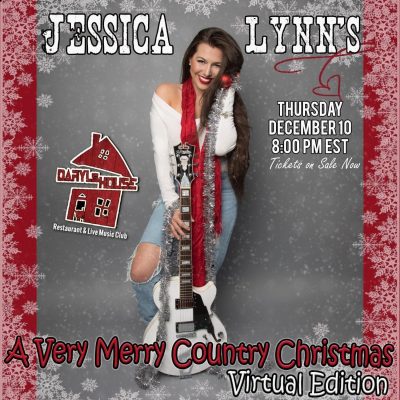 Following months of anguish and unease, rising country star Jessica Lynn knows just how important it is to put folks in the holiday spirit this year.

With so many in need of joy, hope and a distraction, Lynn said she didn’t want to let audiences down by canceling her annual Christmas event, which usually includes several local dance troupes, choirs and musicians joining her on stage throughout her two-hour show at The Paramount in Peekskill.

While she admitted canceling almost became inevitable, her love of Christmas, giving back to the community, and honoring tradition prevailed.

“I was holding on all this year hoping this show would happen and we tried every option and there was not a single option that would allow us to put on our show,” Lynn, a Yorktown resident. “I realized that we have to keep this tradition alive because it’s been such a big deal for the last five years and a tradition for so many families.”

With the current health crisis derailing plans to return to The Paramount, Lynn and her seven-member band, which includes her father, mother, and husband, will transition to a virtual platform to spread the holiday cheer. Her show will be free and live streamed from Daryl’s House in Pawling on Dec. 10.

Unlike previous years, the show will be free to all, though Lynn said the event will accept virtual donations in lieu of tickets, with contributions split between Lynn’s band and Daryl’s House.

“I feel like this year more than ever people need something and maybe not everybody can afford a ticket,” the 30-year-old singer said. “I wanted to make it’s available to everybody.”

Donations can also be made to Toys for Tots, an organization Lynn regularly supports during her annual show.

While Lynn is excited to perform this month, her admittedly favorite show to play comes after a year full of sadness and adjustment. Like many who have lost their jobs or been forced to put plans on hold due to COVID-19, Lynn had to quickly adapt after her five-month long international tour was cancelled in March.

The tour, which she performs yearly, spanned 12 countries and 80 cities, with the Christmas show her final stop. Lynn said the tour, along with other local shows, makes up the revenue her band needs to sustain, perform, and support themselves individually.

When everything was canceled, Lynn said she spent a lot of time crying and wondering what the future held for the career she had spent half her life building.

“Our stages are gone, our work is gone, our shows are gone, and you just feel very lost and you don’t know where to turn or what to do,” Lynn said. “But then I realized early on that you have to have this mindset that everything will be ok, and as soon as I dried off my tears I decided to fight back.”

With motivation to maintain a positive outlook, Lynn upped her social media presence and transitioned to the most high-quality technology that would allow her to host daily live stream performances on her Facebook page. She also reached out to radio stations and media outlets across the United States and internationally to schedule live virtual concerts and interviews.

As a result of her determination to press on and fight back against the virus, her audience has grown from thousands to millions in months with people tuning in to hear her sing from all over the world. She hopes the same will happen with her Christmas show.

“I miss performing so much and it’s really where I feel most alive in life,” Lynn said. “For me, starting our rehearsal now, I’m so thrilled to do that and feel some sense of normalcy and get on a stage again even if there’s nobody there and be able to perform and do what I love.”

Throughout the hour-long show, audiences can expect to hear Lynn’s Christmas songs “It’s Just Not Christmas” and “Santa You can Skip Our House,” along with other traditional holiday classics.

“A Very Merry Country Christmas” is scheduled for 8 p.m. on Dec. 10. For more information on the show or how to donate, visit https://www.ticketweb.com/event/jessica-lynns-a-daryls-house-tickets/10766545?REFERRAL_ID=TW_CONF_FBSHARE&fbclid=IwAR3vG1bCLqfd74nJqsxabveLA1pc9hVUoPZSgO_TRGfS6znJS9_Wh5jFNTo

Forging community in Westchester with thoughtful local journalism — one deep dive at a time.
A Q+A with Westchester D.A. Mimi Rocah
Our Best Bets for This Weekend (and Beyond): What to Do and Where to Go
Making It
“State of the Art” Specialty Coffee
Winter Workouts