Josh Schuback may be one of the best young table tennis players around but he doesn’t bother talking about the sport he loves.

For many who don’t play competitively, table tennis isn’t a sport, despite the split-second decision-making and even quicker reflexives needed to perform at a high level. It’s just a game you play in your basement, fooling around among friends.

That’s why, unless one of Schuback’s friends mentions it, he doesn’t. There are only a select few who really understand what the niche sport is about.

“They usually make a face and say ‘ping-pong, that’s not a sport,’” said Schuback, a 14-year-old Pleasantville resident. “They don’t understand how fast it is, how physically draining it is, how much training and dedication it takes.”

Fellow player, 13-year-old Matthew Needle, received similar reaction from friends, as does Aaron Wald and Rahul Acharya. All four boys, brush off the skeptics for good reason: to them it’s serious business. Schuback and Needle are the top two junior players at Westchester Table Tennis Center in Pleasantville,  and Wald and Acharya have rapidly progressed since taking up the sport.

The four players began concentrating on ping-pong in the spring of 2011, coinciding with the opening of Westchester Table Tennis on Tompkins Avenue by Will Shortz and Robert Roberts. Once they each picked up a paddle inside the state-of-the-art center, they were instantly hooked. Wald, 15, of Mount Kisco used to be one of those kids who fooled around with the game in a friend’s basement–until he started taking lessons last year.

In Acharya’s case, he’s had a table at home since he was seven years old, but his love for the sport didn’t mushroom until recently. He joined the center a year ago but a broken finger sidelined him until September. While the other three boys are rated higher than Acharya at this point, their talent keeps pushing him to reach higher levels, he said. Right now, Schuback and Needle lead the group, but they both know if they slack off Wald and Acharya could pass them by.

One of their instructors, Rawle Alleyne, admits there’s a certain atmosphere of ambition the center tries to cultivate between players. He expects certain behavior from the group on and off the court. Some fun is okay, but not too much.

“Like any sport, once you have your peers, they always do push you and we try to create an environment where it’s not only (a) nose-to-the-stone kind of thing,” Alleyne said. “We also try to develop the whole individual.”

That balance between wanting to beat your good friend on the court while having laughs off of it is perfectly scripted with Schuback and Needle. Being the two best young players, Needle acknowledged the other two are good but Schuback’s play is the toughest. Meanwhile, Schuback calls the relationship “very competitive but friendly.”

“We improve together, we train together,” Schuback added. “We’re competitive but off the court we’re good friends.”

Fortunately, the entire group gets along because the four players certainly see each other enough. All but Archarya said they visit the center about four times a week, with extended stays of at least four hours and sometimes lasting for up to 10 hours. Acharya said he makes it to the center at least three times a week for a couple of hours. For each one, it takes precedence over anything else going on in their life.

The training is required in a sport where exceptional hand-eye coordination is essential, but only takes you so far. All four teenagers compete in tournaments, either at the club on a monthly basis, or for Schuback and Needle, even more frequently by traveling to competitions.

In table tennis, like being on a deserted island, there’s only one person you can rely on—yourself.

“It’s one of the hardest sports because you’re moving at all times,” said Acharya, 13, a Chappaqua resident. “It’s different from baseball or something where sometimes you’re waiting for the ball to come to you. The ball always is coming at you in table tennis.”

While it’s physically exhausting, it also takes effort to stay sharp mentally for fast-paced games that are decided at 11 points.

“It’s pretty mentally draining because you can get pretty frustrated,” Wald said. “It’s hard to control yourself when you start doing things and start losing the game.”

Each player has a rating and it only improves if you defeat players that are rated higher. So far, Schuback is the top rated player of the four. Roberts, who also trains the junior group and is a three-time Caribbean Table Tennis Champion, said nothing would please him more than to see one member of the group eventually overtake him. It’s a level each one of the four players aspires to reach.

Schuback said his goal is to make the United States Olympic table tennis team in 2016, an objective that’s on his mind daily. If that were to happen, it’d be hard to imagine any of his friends questioning whether he plays a sport or not.

For now Acharya said some of his friends keep calling table tennis a “fake sport.” Wald’s friends will keep asking if that’s the sport where players wear “short shorts” and Needle and Schuback will avoid talking about it with those who just don’t get what table tennis is about.

“People don’t understand the true power of the sport here,” Needle said. “It’s really fast although most people think it’s really, really slow and boring, but when you have less than a second to think about what you’re going to do, it’s really difficult.” 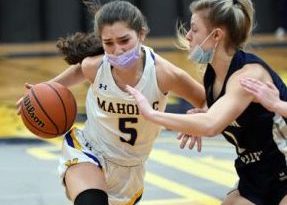 Putnam Valley vs. Mahopac was Epic; Yorktown Heating Up 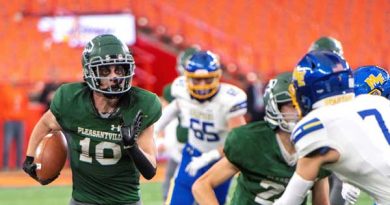