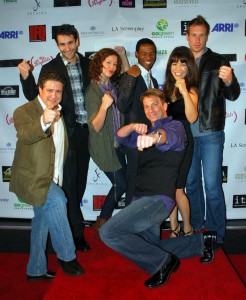 Fans of romantic comedies across the country will soon have the chance to see one of White Plains’ own, as last month city native Matt Markey sold his film, “Ricky,” to the distribution company ITN Distribution. This spring, Markey says, Ricky will be available on DVD and on demand in the United States and Canada.

“It meant everything,” Markey, who now lives in Los Angeles, said of getting his movie sold. “This was the absolute pinnacle, that all the hard work paid off and people’s faith and trust in me wasn’t in vain. I came through for them.”

Ricky, which pays homage to the 1976 Oscar winner “Rocky,” tells the story of the title character’s quest to win back his ex-girlfriend after she dumps him in the film’s opening minutes. The audience learns that the woman was only dating Ricky, played by and based loosely on Markey, as part of a bet.

“When they expressed interest was when it got into both the festivals and won,” Markey explained. “Obviously, they have to believe in the film.”

Markey will see 70 percent of profits made by the film, while ITN Distribution will handle the promotion and marketing.

Markey said he plans to put the money he makes on Ricky towards his next film; he’s deciding between another romantic comedy – perhaps a Ricky sequel – and a drama about two boys convicted of a crime they didn’t commit.