The Peekskill High girls’ basketball team walked into the Westchester County Center on Sunday wearing shirts that read, “We started from the bottom, now we’re here!” The print on their shirts couldn’t have been more accurate, with the No. 11 Red Devils starting the season 1-7. Coach Rodney Headley’s hope was to merely win one playoff game, and then build on it going into next year. But something magical happened along the way. 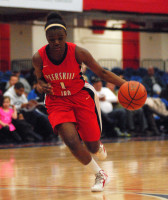 Peekskill G Lanay Rodney erupted in the second half of the Class A championship, lifting the Red Devils past Albertus Magnus, 55-48, in the Section 1 finals at the Westchester County Center last Sunday.
RAY GALLAGHER PHOTO

Peekskill became the perfect Cinderella story, going 8-2 over its last 10 games of the regular season, gliding all the way to the Class A finals; becoming the first team to win an outbracket game and make it to the last round of the postseason. Once they reached the finals, they saw it through, winning 55-48 over No. 4 Albertus Magnus to collect the Class A title for the second time in three years.

Headley, who led the Red Devils to a state championship in 2011 and is now leading a team without a senior, didn’t think he’d have his hands on a gold ball when the season commenced.

“We never really imagined it,” he said. “It’s amazing; with a young team you just never know. Everything is a variable. Our goal at the beginning of the year was to come up and win at least one round. Just to have them want to better themselves is really good. They never quit, and that 1-7 start – no one remembers it.”

The Red Devils exchanged the lead with Magnus several times in the second quarter, taking a slim 25-23 lead into the locker room at the half. In the third quarter Peekskill found its offensive rhythm, charging on a 16-8 run to jump ahead 41-31 at the end of three; shades of their 16-4 run in the third frame of their quarterfinal game against Rye to pull ahead and run away with the win.

Freshman Lanay Rodney – who played through a stomach ache and had no points in the first half – exploded to lead the Red Devils with 18 and threw in six rebounds. Her second half dominance was good enough for her to be named MVP of the Class A tournament. To her, keeping the faith was what made the difference.

“We just had to keep believing,” Rodney said. “We know we’re a young team, we just have to keep playing. We just need to keep going, keep pushing ourselves.”

Another young sniper that helped steal the show was eighth-grader Nyrie Holliman, who carried the Red Devils through the first half with eight points and ended with 14. Latisha Clark (all-tourney) also contributed with nine points to help Peekskill finish, Headley noticing a discrepancy on the boards.

“I saw from the Pearl River game that Albertus was a weak rebounding team,” he said. “They were battling – they did do a good job – but I saw so many rebounding lanes. I told my girls that if they see a lane and nobody touches you, just go for the rebound.”

Peekskill (14-9) now stays alive with the section crown, and will compete in the regional game this afternoon vs. Wallkill of Section 9 at Mount St. Mary’s in Newburgh. Headley’s girls have already exceeded his expectations, and with the experience of playing for the state title already under his belt, he could potentially lead his team to yet another appearance in the NYS Class A Final 4.

“It was amazing in 2011 and it’s one step above that now,” he said, “because these girls worked even harder and they’re even younger, so it feels good.”