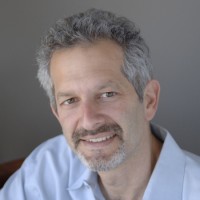 Stephen Apkon, founder and executive director of the Jacob Burns Film Center, was awarded an honorary degree and delivered the commencement address at Pace University’s May 11 graduation at its Pleasantville campus.

The ceremonies, which also featured U.S. Senator Charles Schumer, drew more than 3,000 people who watched the 443 graduates receive their degrees.

“Today is not just a marking of classes taken or credits earned, of tests passed or majors fulfilled, it is neither beginning nor end, but rather a place to stop, to celebrate your accomplishments and to look toward the future,” Apkon said. “It is a turning of the page.”

Apkon spoke to graduates about the importance of stories in their lives and how that has evolved over the years.

“I have pinned above my desk a quote from the great American documentary filmmaker Albert Maysles who said, ‘The stories people tell have a way of taking care of them. If stories come to you, care for them. And learn to give them away when they are needed. Sometimes a person needs a story more than food to stay alive. That is why we put these stories in each other’s memory. This is how people care for themselves.”

Despite the steep challenges facing graduates, Apkon pointed out how the world is more interconnected than it has ever been and how much easier it is to bring stories and information to the masses.

“Over four billion videos are viewed [on youtube] by more than 800 million people,” Apkon said. “More video is uploaded each month than our networks produced collectively, in their more than 60 years of existence. Videos can be created and shared by each of us as a result of hitting send.”

In his parting words to the Class of 2012, Apkon told them to write their own story, occupy their life and listen deeply.

“Foster the seeds that have been planted in your time here at Pace University,” Apkon said. “I congratulate you and wish you continued success. I wish you happiness, fulfillment and deep connection. And I wish you uncommon sense.”

Schumer congratulated the graduates and told them and their families to cherish a special moment such as this.

“One of the greatest days of the life of my wife and me was seeing our daughter graduate college,” Schumer said. “Congratulations to your moms and dads.”