When the No. 1 Ossining Pride finished off the No. 2 Our Lady of Lourdes Warriors on Sunday at the Westchester County Center, Coach Dan Ricci – an ear-to-ear smile plastered across his face – uttered four words: “this doesn’t get old.” For the third straight year his Ossining girls captured the Class AA title, the Pride with an 83-51 section-clinching win over Lourdes to complete the three-peat.

“People don’t realize how hard this is to do,” Ricci said. “We’re really deep as a program, we get kids ready, and coming into this game I knew Lourdes was going to do all the fundamentals right. I just thought we were better athletically and we were deeper, and it showed.”

The Pride, despite a rather decisive win, started off slow, falling behind 10-6 midway through the first. But once the agile, UCONN-bound senior idol Saniya Chong got rolling, Lourdes’ front court didn’t stand a chance. Ossining went on a staggering 22-4 run to close out the first quarter: the Pride taking a 28-14 lead after one.

Ricci made an adjustment that allowed the Pride to take control.

“We were in a full-court, man-to-man press, and they (Lourdes) were getting easy baskets,” he said. “I went to a man-to-man where we let the ball come in, pressured them, and then there was a change. That was the key.”

Ossining kept the fast pace going in the second quarter, and blew the lead up to 50-26 at the half – mostly thanks to Chong, who was named MVP of the tournament and was at the forefront of Ossining’s offense. She sparked the Pride with a team-leading 39 points: three of them came on a half court buzzer beater to close out the first quarter, an eyebrow-raising shot that almost mimicked the shocking ending of the Mt. Vernon/New Rochelle boys’ game. She added six rebounds, 11 steals, and seven assists. Like Ricci, it doesn’t get old for her; Chong elated to finish her legendary career off with a third section crown. 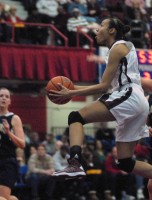 Ossining G Saniya Chong soars to rack for two of her 39 points in the Pride’s 83-51 Section 1 Class AA title-clinching win over Lourdes to complete the three-peat last Sunday at the Westchester County Center.

“There’s kind of no words to say it,” she said. “I’ve had an amazing four years being here; coming out with a gold ball three years in a row, I think it’s just a fantastic feeling. You could see how the hard work results in our game.”

Ricci couldn’t have been happier to see his leading lady – and the Section 1 all-time leading scorer – go out on a winning note.

“She’s at the point right now where she knows she’s the best player in New York,” Ricci said of Chong. “She’s putting the team on her back and says ‘we’re winning.’ That’s what she’s doing and she continues to do it.”

Chong’s supporting cast did a fine job as well, Ossining receiving tremendous offense from every one of its players. Freshman Shadeen Samuels (13 points, six boards, four assists, one steal) and senior Danielle Gervacio (10 points, three rebounds) provided stellar reinforcements for Chong – and like Chong, Gervacio is just as thrilled to be a section champ for the third straight year, going out a winner.

“It’s great,” she said. “It’s always great to win one gold ball, but to do it three times in a row is an amazing feeling. It always feels like the first time, over and over again.”

When Chong broke the Section 1 scoring record on Feb. 6, after the game she made a bold remark: “states, here we come.” Now that Ossining has captured the section title, there is still more work to be done, the Pride’s sights set on a state title.

“Our expectation is a state championship,” Chong said. “I think we’re taking it slow, one step at a time; County Center, gold ball. Now, we’re looking ahead to states right now.”

Members of the Ossining girls basketball team pose with their third consecutive gold ball Sunday at the Westchester County Center.

The Pride will meet state-ranked (No.25) Horseheads High School of Section 4 tonight at the College of New Rochelle in the regional match. If Ossining (18-4) wins, they’ll advance to the state quarters to face state-ranked (No.21) Monroe-Woodbury (Section 9) – giving Chong, and the Pride, a chance to meet their goal.