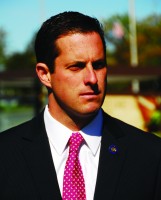 Hundreds of residents within the 40th Senate District received a robocall on Thursday, March 1 stating that Assemblyman Steve Katz (D-Yorktown) was hiding something from the public. In fact, Katz admits he has been arrested twice in his life but says he has never been convicted of a crime.

The call, which was done anonymously, claimed “that Katz was hiding a dirty secret,” and that he should “come clean” and “release his record.” Katz has accused Senator Greg Ball of being responsible for the call. Ball’s office has denied the charge.

Buzz started swirling and comments started to run rampant on the Brewster 10509 email forum as well as on Facebook.

When asked about the reference, Katz said, “I have been arrested twice in my 58 years,” he said. “Both were funny incidents that have become after-dinner conversation.”

The first arrest, according to Katz, occurred when he was living in Philadelphia.

“I was helping an 80-year-old woman who was living with her 102-year-old mother,” said Katz, who is a veterinarian and graduated from the University of Pennsylvania.  “Their 90-pound German Shepard died and they asked me to take care of it for them.”

Katz was bringing the dog back to his veterinary hospital to put the dog in the freezer.

“Well I went over there and did that for them,” he said. “I put the dog in the trunk of my car and without being specific it started to ooze on my daughter’s Barbie dolls. I was going to take it to my hospital, but I realized I did not have the keys, my assistant did. So I went back to my apartment to wait for my assistant to come.”

While waiting, Katz said he put the deceased dog on top of his garbage cans to get it out of the trunk while he waited for his assistant.

“Well, when I turned around there were two policemen there wanting to know what I was doing,” he said. “So I told them, at which point they arrested me.”  Katz was charged with short dumping, the illegal dumping of trash and debris.

When he went before the judge for the arraignment, Katz said he again explained the situation: “I told the judge what happened and she turned to the officers and asked, ‘Did you go into the apartment building to see if Dr. Katz did in fact live there.’ The officers said no.”

The judge dismissed the charge.

The second arrest happened in the Bronx, after Katz and his wife Nicole opened up a new veterinary hospital.

“A couple came in with a vicious Chihuahua, that they could not control and were afraid of,” Katz said. “The dog ended up lunging on me and latching on to my glove with his teeth. In the process of me trying to shake him off, he fell off of the exam table.”

The people, Katz recalled, were freaked out and called the police who arrested him.

“When I got down to the precinct, they had to figure out what to book me with,” he said. After another vet verified how ferocious the canine was the charges were dropped.

“Those are my arrests,” Katz said. “They are stories that have become after-dinner conversation, not dirty secrets.”

Nearly all of the comments posted on the Internet attributed the call to state Senator Greg Ball’s (R-Patterson) campaign team, which has a history of using the political tool to get messages out to Ball’s constituents.

“I knew that this was going to be a dirty campaign, but Greg Ball’s latest robocall was over the top,” said Michael J. Counihan on the Brewster 10509 email forum.

In the 2010 campaign Ball used robocalls against his primary-rival Mary Beth Murphy, town supervisor of Somers, and his general election opponent Michael Kaplowitz.

Katz is in the process of deciding whether he will run for re-election as an assemblyman, in a race where two other Republicans have already come forward as contenders, or if he will instead primary Ball, who was once his political ally for the senate seat. Katz has publicly said, “I am seriously considering it.”

He had a meeting planned to discuss the matter with Senate Majority Leader Dean Skelos, the same day that the robocall went out.

According to Katz, Ball heard the story of the arrests almost two years ago at a dinner party they both attended. Then about two weeks ago, Katz claimed, Jim Coleman, Ball’s chief of staff, contacted him and told the assemblyman that if he continued to consider the senate seat that they would use the information of his arrests against him.

“This is an outright lie, but a great campaign strategy to cloud a two year cover up of a double arrest record,” said Coleman. “Senator Ball is the state’s top ranked conservative senator and the assemblyman is smartly fabricating these outright lies to justify a senseless primary, jeopardizing this critical senate seat.”

Coleman claims that if Katz goes through with a primary against Ball it would a betrayal against a man that has helped him get to where he is at.

“From providing tens of thousands of dollars in direct and indirect campaign support to the assemblyman to legislatively helping the assemblyman learn his way around the issues, no one has done more to help him than Greg Ball, and our staff,” Coleman said. “Should he follow through with this primary, and open the pathway for the tax and spend New York City democrats to take the seat, he will be pulling a Benedict Arnold that makes Judas look like a girl scout.”

“The stress of the Assemblyman’s current three way primary is understandable, yet attempting to pull Senator Ball into that stress is not,” added Brittany Serra, Ball’s director of communications. “Senator Ball is focused on creating jobs, cutting taxes and delivering for this district and its no time for political games or division. As always, the Senator is committed to working together, with all elected officials to accomplish those goals and focus on delivering for the people, in these tough times.”

Coleman denied any responsibility behind the robocall.

“We had nothing to do with that,” said Coleman. “It was not a Ball campaign-sponsored communication.”

No one has yet taken responsibility for the robocall.