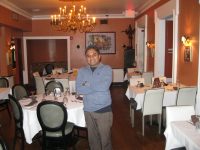 Brewster resident Roshan Balan has owned and managed Jaipore Royal Indian Cuisine in the village for the past two years. Neal Rentz photo.

Brewster resident Roshan Balan had worked for several years in various capacities in the restaurant business before deciding to own his own eatery.

Balan became the owner and manager of Jaipore Royal Indian Cuisine in Brewster two years ago.

The name of the restaurant, which was in place when he became the owner of the establishment, is based on the similar name of a district in northwestern India, Balan noted last week.

Balan, who does some of the cooking, provides a wide range of Indian dishes. The restaurant originally opened in 1993. The establishment was created by a group of investors, who were eventually bought out by Balan’s boss since 2001, Shiva Natarajan, who owned 18 restaurants in the area at one time. “He started giving away the restaurants to his managers” after he became tired of the industry, Balan recalled.

Natarajan owns the property and Balan leases the building.

Balan said his restaurant serves many traditional Indian dishes, nearly all from recipes from the northern part of the nation.  “The northern dishes are more rich and creamy” compared to southern Indian fare, he said. “(Customers) don’t want to venture out and try something different.”

Some of the many dishes served at Jaipore Royal include Chicken Tikka Masala, which is skewered chicken with a creamy tomato sauce; Malwani Chicken Hara Masala, that features a coconut sauce; and Shrimp Takda Masala, which Balan said is a blend of northern and southern Indian cooking, including a variety of spices.

There are spicy and non-spicy dishes are offered at Jaipore Royal, Balan said.

Brunch and dinner buffets are offered on Sundays and the restaurant has a popular take out service, Balan said.

The Route 22 building that houses the restaurant has a long and storied history.

The mansion was originally built in 1856 and was a private residence for decades.  One of the residents was Henry Ward Beecher, brother of Harriet Beecher Stowe of “Uncle Tom’s Cabin” fame.

In the silent film era of the early 20th century the building was occupied by the Charlie Chaplin Studios and was used as a movie backdrop by the legendary comedian and director. The great director D.W. Griffith is reputed to have used the building in his movies and the cast of his movie “America” was housed there while the movie was being made. In the 1920’s it was used as a speakeasy.

Balan said he enjoys the restaurant business. “I’ve made a lot of friends here,” he said.

Balan said he is seeking to open a second restaurant, possibly in Connecticut.

Jaipore Royal Indian Cuisine is located at 280 Route 22 in Brewster. For more information call 845-277-3549, send an e-mail to contact@jaiporeny.com or visit http://www.jaiporenyc.com.