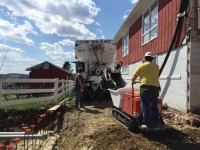 Some of the construction taking place at Tilly Foster Farm.

Apparently up against the clock to finish renovations on the Tilly Foster Farm campus, Putnam County lawmakers are leaning toward using union workers to complete work left on the county property.

Eliminating the need to put out a request for proposal, which would slow down getting the construction on the historic farm done by a March 1, 2016 deadline, Personnel Chairwoman and Legislator Ginny Nacerino said the temporary workers are necessary, during an Aug. 18 committee meeting.

“We need to hire union workers due to the fact that we have a short window of opportunity to get work done at Tilly Foster Farm,” Nacerino said

County attorney Jennifer Bumgarner said the county would sign on the union’s collective bargaining agreement and an hourly wage has been decided on. The money the county would use to pay the temporary workers is from the $1 million bond the county Legislature just approved a couple weeks ago. The expenditures would not exceed $75,000, Bumgarner noted.

Department of Highway and Facilities Commissioner Fred Pena said four carpenters would do framing for 4-6 weeks.

Legislative Chairman Carl Albano said it’s imperative to have a building envelope of the facility done before the winter and cold weather and that it would make sense to have highly trained workers aboard for a short duration to ensure the work is done punctually.

Legislator Dini LoBue gave stinging disapproval to the proposed deal calling the March 1 deadline to complete work for BOCES a “false deadline” and that the deal with BOCES isn’t even signed yet.

She criticized the county executive administration for not putting the work out to bid, considering the costs would be more than $25,000.

“I thought it was ludicrous we were using in-house personnel. ‘Oh no, I didn’t know what I was talking about,’” LoBue said. “Now a year’s gone by, now we have to go outside the county and we’re not even doing a bid, giving everyone an opportunity.”

Kevin Wright questioned if using union workers is more cost-effective than going out to bid to find an independent contractor, though Pena said it would be cheaper with the route the county is choosing.

CSEA Putnam County Unity 8150 President Janet Canaday questioned if the workers from the carpenter’s union have been laid off and if so, for how long because “if a person has been laid off for a while, they’re not very good workers.”

She also said she didn’t want a precedent set where temporary workers would be used for other projects around the county, instead of hiring more county workers. She also noted there are workers in the county classified as temporary that have been working for the county for years.

Deputy County Executive Bruce Walker said the county made sure to only use contractors for specific items during the renovations in order to be cost effective. The facility needs to be “buttoned up” before the winter season to continue work on the inside regardless of the weather. Walker emphasized the union workers are expected to be county residents.

“This is a success story. We have saved hundreds of thousands of dollars by doing work in-house,” Walker said. “ We fundamentally rebuilt an entire structure, which was our commitment to make Tilly Foster whole.”