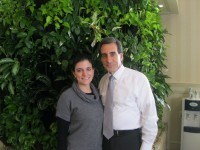 Anthony Guarino has been the funeral director of the Yorktown Funeral Home since it opened five years ago. Also shown above is his daughter, Tracy, a Yorktown resident who is a funeral service associate at the home.
Photo credit: Neal Rentz

The Yorktown Funeral Home opened in Shrub Oak five years ago, but the funeral home business has been a long tradition for the Guarino family.

Mount Pleasant resident Anthony Guarino and his daughter, Tracy, who resides in

Yorktown, are continuing their decades-long family business. Anthony is the funeral director and his daughter is a funeral service associate.

“We are a nondenominational funeral home. We cater to all religions,” Anthony said recently. “We have wakes here and we have funeral services.”

Anthony said the family’s first funeral home, Woodlawn Morticians, opened in the Bronx in about 1930. Though the family no longer operates a funeral home in the Bronx, it does have another location aside from the Yorktown site. For the past 35 years Anthony has also worked at Yannantuono Funeral Home in Mount Vernon.

Anthony said the Yorktown Funeral Home has many clients that formerly lived in the Bronx and lower Westchester who had used the services of his family’s Bronx and Mount Vernon funeral homes and have moved up to the northern Westchester area.

“Population changes brought us up to this area,” he said.

Anthony said he and his brothers first became involved in the funeral home business when they worked for his uncle, the late Tom Abruzese. Anthony said he worked the night hours of 6 to 10 p.m. weekdays as a receptionist while still attending school.

“At some point I just decided that it was a business that I liked to be in because I like to help people,” Anthony said.

Tracy began working at the Yorktown Funeral Home five years ago. “I was just working with my dad and one day I just decided that I really want to help people so I went to school,” she recalled.

To work in the funeral service industry a person needs an associate’s degree in mortuary science, Tracy noted.

“You’re learning about how to help families, about different merchandise, how to talk to different families, and there’s also the science part of it,” she said. Her father added, “Its chemistry. It’s anatomy. It’s psychology.”

Every year the funeral home offers a special program during the Christmas holiday season. “We invite all of the families who have had funerals here, or even if they haven’t had funerals here,” Anthony said. “We ask them to bring an ornament and we set up the tree inside. We have a minister come and he does a service for us in remembrance of all people who have passed away that year. And it brings everyone together because during the holidays it’s very difficult for families who lost someone.”

Anthony said strong interpersonal skills are needed to succeed in his industry. “It’s a very, very sensitive area. What you need in this business is first of all, you need to be a good listener,” he said. “You have to be able to ask the appropriate questions and you have to understand people’s backgrounds, where they come from, what kind of interaction they had with their parents or their loved one, whoever it was that passed away. You have to be understanding and non-judgmental.”

Tracy said it was not difficult for her to deal with people who have just lost a loved one. “It just came natural. You’re sitting there having a conversation, learning about their family, learning about their background,” she said. “You’re helping them so you want to be there for them. It’s an honor to do that.”

“When people come back to you and they tell you how much they appreciate what we’ve done for them” is gratifying, Anthony said. “When someone (a family member) passes away those first couple of days after are the most difficult for them. We’re able to organize it and put together a time for them when their friends and family can gather and give their condolences. It’s a stressful time for them and we try and make it as easy as possible for them.”

The Yorktown Funeral Home is located at 345 E. Main Street in Shrub Oak. For more information, call 914-962-0700 or visit http://www.yorktownfuneralhome.com.