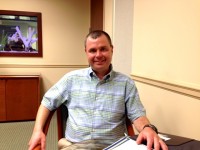 Nine years ago when Adam Stark left his career in mergers and acquisitions to form his own venture, he walked right into a rising business trend.

Originally named Stark Business Solutions, Adam says his company, now called Stark Office Suites, was founded on a lot of research and the idea that local outsourcing of business services was a growing concept.

In an interview with Stark last week at the company’s expanding White Plains headquarters, he said: “When you hear about outsourcing most people think it means overseas, but that is not necessarily the case. When big companies cut back, they often seek professional services from smaller companies and many of those people work out of home offices.”

In 2004, that was definitely the case for Manhattan-based firms seeking refuge from high real estate costs. They wanted smaller office space in New York and satellite offices in suburban communities. At the same time, White Plains was in the middle of a renaissance with the growth in residential and retail establishments adding prestige to the city’s downtown core. It was a perfect storm and Stark saw how he might be able to leverage it.

A new Greenwich, Conn. location is opening in October and Stark says he has relationships with affiliates on Long Island. Altogether the growth amounts to 130,000 square feet of space, which clients can utilize as part of a growing network.

Stark changed the name to Stark Office Suites to reflect the increasing demand for individual small offices and office suites.

A tour of the White Plains facility shows different sized and configured conference rooms, single offices with varying degrees of furniture and interior design, from basic and simple elegance to the more luxurious, common areas where postal machines and photo copiers are located and a very nicely appointed reception area with a separate waiting area/meeting room.

The technology infrastructure is constantly upgraded and includes high-speed fiber optic Internet connections and a state-of-the art telephone system with smartphone integration for faxes and voicemails.

The different packages offered include the virtual office and full-time space rental. Most of the growth in square footage reflects the increasing demand for full-time office space and a rise in demand for office suites. Starks says that what differentiates him from similar ventures are the flat-fee packages he offers.

The full-time office suite renter has access to all the advanced office equipment and full-service shipping centers, a listing on the building’s lobby directory and access to all Stark’s locations for mail, phone and meeting venues.

Stark also notes that each of the facilities offers a different type of professional experience. “When a client comes looking for space, I offer them a tour of the different locations. Each one has a unique personality. The client picks which one feels just right.”

Each location has a community atmosphere created by the businesses it houses. Mt. Kisco, for example, has a group that socializes around the office cooler. Scarsdale on the other hand is quiet. The New York City offices are full of attorneys, who are very chatty, Stark shares.

The business caters to financial professionals and lawyers, primarily, but there are psychologists and entrepreneurial start-ups taking advantage of the upscale offices.

Stark now serves over 600 clients and his occupancy rate is fairly high. He says he is usually 85 to 90 percent full. In fact the New York City location has a waiting list.

There seems to be no end in sight to this outsourcing trend. Many of Stark’s clients are aging professionals who are choosing to leave larger corporate offices and venture out on their own where they have more flexibility. The Stark environment gives them the professional atmosphere they need without the added costs of furnishing and installing infrastructure.

To find out more about Stark Office Suites visit starkofficesuites.com or call 914-428-0500.