Skip to content
The Putnam Examiner
November 23, 2013 David Propper 487 Views 3 min read
We are part of The Trust Project

The symptoms can range, some being more severe than others, but the diagnosis is puzzling, or most of the time completely off the mark.

Patients stricken by CADASIL syndrome can face a frustrating collection of signs before the disease is recognized. Some of the symptoms can be somewhat pedestrian like numbness or tingling and dizziness or nausea to more serious warnings like severe migraine headaches and even strokes.

Still, Cerebral Autosomal-Dominant Arterlopathy with Subcortical Infarcts and Leukoencephalopathy (or CADASIL for short) largely goes unnoticed and untreated. There is currently no cure for it, though not surprising considering many doctors are unfamiliar with the syndrome.

But Putnam County resident Barbara Hunt and former county resident Janice Ragazzo are looking to change that. Both are part of the CADASIL Association and both fully understand the impact the syndrome can have.

Hunt, who lives in Carmel and is the co-founder, vice president and treasurer of the CADASIL Association, said her husband for years would complain about numbness in his fingertips and then on the left side of his face.

Her husband’s sister and brother had been diagnosed with Multiple Sclerosis so when he was also given that probable diagnosis, Hunt found it odd that would be the case.

At that point, he ignored the possibility of having MS and simply went on living his life. Finally in 2010, after it was discovered another relative actually had CADASIL, it was confirmed that’s what Hunt’s husband had as well.

“It’s considered so rare that doctors don’t even look for it most of the time,” Hunt said. “We’ve had doctors say to us ‘I thought I’d never see a case of it in my lifetime, in my career.’”

As for Ragazzo, she is personally connected because her daughter suffers from the devastating vascular disorder in the brain. At just 24-years-old, Ragazzo’s daughter suffered a stroke.

After being taken to the hospital and eventually having a bunch of tests run on her she was diagnosed with CADASIL. Ragazzo’s daughter, who is a teacher, still suffers from debilating migraines that can last for multiple days.

The syndrome is incredibly rare and Hunt said just five years ago it was estimated only 1 in 100,000 people suffered from it. Currently, new figures state it is now 2 in 100,000 people. And she believes as time goes by and more doctors become aware of CADASIL that number will jump even more.

“They say as it is such a rare disorder that how was it that (Hunt and myself) lived within 15 minutes of each other,” Ragazzo, who now lives in Dutchess County, said. “So we started saying it can’t be that rare if look how close we are.”

The CADASIL Association was started in 2012 and has about 100 members that stretch over all 50 states. It is a non-profit organization whose president is Anne McGuinness, who resides in New Jersey.

The two have done much since meeting up to inform people of CADASIL. They’ll talk to anyone who will listen.

This past Saturday was CADASIL Awareness Day, in which Hunt handed out brochures and education cards and for those who took a further interest she was ready to tell her personal story.

Hunt also goes to different locations and always carries educational material for the people she runs into. Recently, Hunt spoke with a public health nurse at the Putnam County Department of Health and gave her information to pass along to others. She has also been to the Visiting Nurse Service on Route 22 and Putnam County Hospital, too.

Even when she dropped her twin granddaughters off at ballet, she spoke to other parents and grandparents.

On Nov. 6 during a county legislature meeting, Hunt and Ragazzo received a proclamation from the legislature. While Ragazzo spoke about her daughter’s experience, all nine legislators listened intently.

Ragazzo and Hunt are leaving for Washington, D.C. Tuesday to urge organizations to keep the funding at a reasonable level for CADASIL so doctors and researchers can keep studying the syndrome, even if the money is minimal.

“It hasn’t had the exposure that people know about it,” Ragazzo said. “Or even know to ask doctors.”

And like most diseases that don’t have a cure, finding one is the ultimate goal, even if one for CADASIL is still far off into the future.

“Once we have the awareness out there,” Hunt said. “Maybe we can start really looking harder at research.” 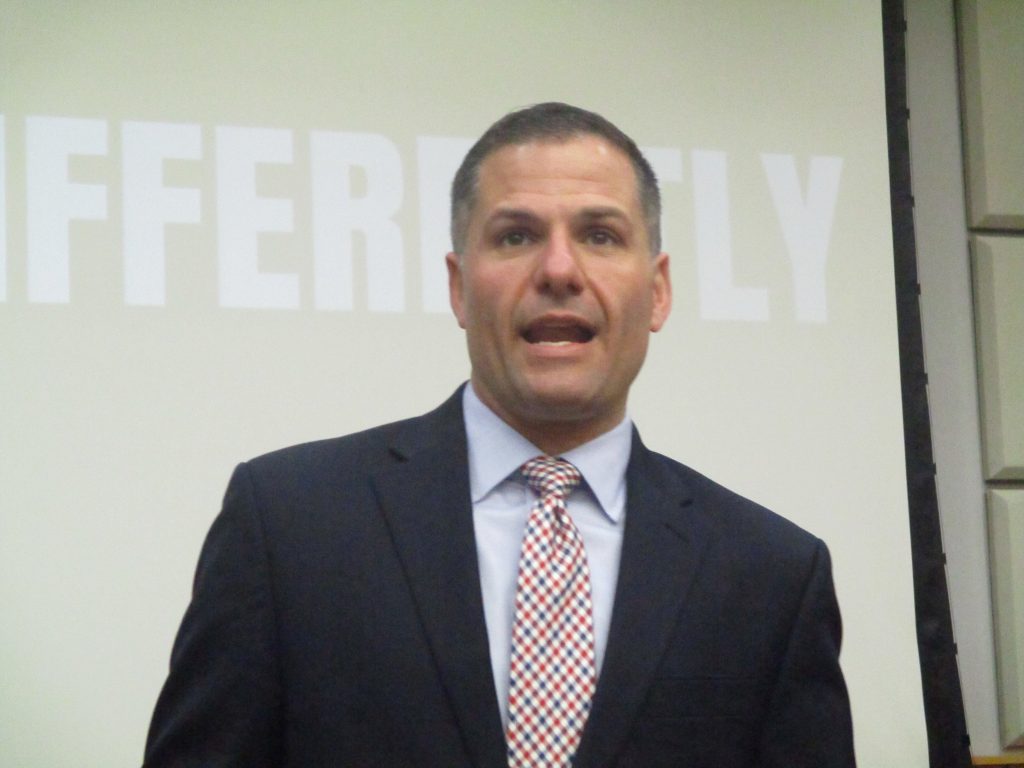 Legislators Leaning Toward Styrofoam Ban in All County Buildings