The sprawling campus of Lakeland High played host to the Section 1 soccer championships last Sunday and the action was fast and furious. As always, Lakeland Coach Tim Hourahan, his staff, and A.D. Dan Belfi were the perfect hosts, providing everything and anything soccer fans could demand.

State-ranked (No.2) YORKTOWN took its finest regular season ever into the Section 1 tournament and the undefeated, top-seeded Huskers (20-0) worked a methodical 3-0 win over No.2 Tappan Zee to cop its second Section 1 title since 2017.

Second half goals from Nick Varela – who slapped one off the pipes – Anthony Spina – who beat two dudes off the corner wing– and David Beitler (1A) – a hammer from 35 yards – were the difference.

“All three goals were special,” Yorktown captain Lucas Buono said. “They played us tough, 19-0 versus 19-0 going in, so we knew it would be tough. But the second we got that first goal, the engine just kept running from there. We worked all season for this. Anthony Spina pulls that move out in practice and beats us all the time and he got his chance to bury it and he did. Nick Varela goes to his weak foot off the post for a great shot and Beitler dropped the hammer right into the triangle, amazing!

“We’re not even close to being done yet,” he added. “Our first goal was to win the section, next is regionals and then states.”

The Huskers will get a first-round bye in the state tournament and will host the winner of Section 9/Section 4 Saturday (11:30 am).

In his second season at the helm, Yorktown Coach Zoran Milojevic guided the Huskers to their third sectional title since 1990. He was beaming afterward.

“Every single one of those goals was special,” the coach said. “We had some guys out with injuries and one to a red card but these guys just keep coming through and through and through. Winning sectionals in Section 1 is kind of like winning the European championship, which is stronger than the World Cup. Just getting out of the section is tough enough, and now we have five days to rest and take it all.”

Yorktown advanced to the finals via a very bumpy road, including a 2-1 quarterfinal win over No.8 SOMERS, which had folks talking for days, especially those in Tusker nation, who thought they were robbed. The 2021 NYS champion Tuskers had a late goal waved off and played several men down due to four red cards.

Husker Adrian Pjetri hit a free kick 10 minutes into the game, and fiery Matt Pozo (from D Sean Horlacher) spotted the Huskers a 2-0 lead before Tusker Dylan Ingraham trimmed the deficit in half. Frucco had five saves in a wild game in a wild rivalry.

The unassuming Horlacher gave the Huskers a 1-0 halftime lead in their 2-0 semifinal win over No.5 HORACE GREELEY, heading home a Varella corner kick. Spina spotted Yorktown an insurance goal in the waning minutes, hustling after his own missed shot that caught the post off a Chris Coppola assist. Frucco made seven saves and Greeley Coach Camp Shropshire was quite complimentary of the Huskers.

“They were very tough,” Coach Camp said. “I wish them the best.  They, of course, have a lot of great qualities – size, pace, organization – but their best might be the absence of mistakes. They rarely turn the ball over and, if they do, they are all over us in a team effort to get the ball back.

“I thought we had them,” he added. “We held it down in the first half despite a wind that greatly aided their attack, and we seemed to have an edge in the second, but we just couldn’t find the moment. We got one in, but the referees saw it as a foul and it was disallowed. Soccer is a very painful sport. We were on the good side of it on Tuesday, but not on Thursday.”

“We had a great team this year that reestablished a winning tradition and a level of competitiveness in practice in games that made this a great group of young men to work with this season,” Coach Hourahan said. “I did and still do truly feel that this team’s roster was strong enough to make the finals in class A this year, but we did not get through that game with Greeley: A heartbreaking result that is going to sting for some time. To lose by a goal and have a goal disallowed that was not offside, and to also hit the posts four times was brutal. It’s a game of inches at times, but we were certainly right there with the best teams in the class. I am proud of the season we put together going 13-4-1 and claiming another league title, our seventh in the last 14 years.”

State-ranked (No.1) BRIARCLIFF needed overtime to prevail in its first title appearance since the Bears won it all in 2018, but did so when Emilio Abud-Chalita headed home a textbook corner kick from Theo Molinoff for the game’s golden goal. The Bears will face Section 9 champion Our Lady of Lourdes Wednesday (5 pm) at Hendrick Hudson High School. Bronxville (17-2-1) was more than formidable and prepared Coach Brandon Beck’s Bears (18-0-1) for the rigors of the state tournament.

“It was an incredible win for us,” Bears Coach Brandon Beck said. “To make it all the way through the gauntlet of Section 1 Class B Soccer remaining undefeated throughout our campaign was an incredible accomplishment. These boys lost last year in the sectional semifinals to Irvington. Our coaching staff held many of these boys, embraced in tears on that day. We had a strong JV team last season that never lost a game. Many of these players tonight were ball boys in our 2017 and 2018 sectional and state finals. That right there was the reason we won today. They have dreamed about it for years and it meant an incredible amount to them.

“Bronxville played the best match against us that we have seen thus far” the coach added. “They were incredible in their game plan and had several chances, but our defense held strong. They made this a very difficult game for us. It was a very emotional game for our entire organization and so amazing to see them pull it off in such memorable fashion. We have been talking about this moment since August 22nd. I am glad the boys had a chance to really cherish it tonight. They earned it, but we are not done yet.”

Abud-Chalita also scored a clutch goal in the Bears’ 2-1 semifinal win over Keio. Nathaniel Rohde had the other.

Rohde broke the ice, scoring less than four minutes into the second half off an assist from Connor Dornau. Keio responded five minutes later with a goal from Yu Shimizu. Abud-Chalita clinched the winning goal off an assist from Sebastian Lai while the defense of the Bears, anchored by Toby Young, kept the Unicorns at bay.

Sixth-seeded BYRAM HILLS threw a typical scare into No.2 Bronxville, coming up short in a 1-0 semifinal loss. While rebuilding one of the section’s most feared programs, Coach Matt Allen’s Bobcats (11-6-2) ousted No.3 Irvington in a 2-1 quarterfinal upset behind goals from

Chris Amenedo (from Greg Shrayer) and Jesse Goldstein. The Bobcats will be back next year with the same goals they always have: To win their last game.

HALDANE has had its way with the Class B/C challengers the top-seeded Blue Devils (14-2) faced much of this season, but the bumps in the road will become more frequent as Haldane reps Section 1 – for the first time since 2013 – in the upcoming state tournament after posting a decisive 8-2 Class C title win over Hamilton Saturday morning at Lakeland High.

Blue Devil captain Ryan Eng-Wong walked off with MVP honors after scoring four goals and dominating from start to finish.

Sniper Clem Grossman added a pair of tallies for the state-ranked (No.6) Blue Devils, who face Section 9 champion Rhinbeck Wednesday (7:30 pm) at Hendrick Hudson High in the opening round of the state tournament. PJ Ruggerio and Max Westphal rounded out the Haldane scoring.

“These guys have worked hard all year,” Haldane Coach Ahmed Dwidar said. “Last year, we lost to those guys, so give them a lot of respect. They’re state champs in Class C.  Our boys had a bad taste from last year. Clem and Ryan are Batman and Robin scoring machines. The whole team really is a great group of soccer talent, and I’m blessed to have such a great group that are hungry to win. Our defense is one of the best in Section one in my eyes, with a world class keeper in Ronan Kiter and William Sniffen as the general on defense.”

CLASS AA
No.7 New Rochelle eliminated No.6 WHITE PLAINS, 2-1, after the Tigers worked a 2-0 quarterfinal win over North Rockland.

Against North Rock, Abraham DeOliveira pressed the Raider midfield and won the ball. Skillful touches on a sloppy surface allowed him to beat the next defender and work his way to the corner where he placed a cross to Rhaymani Alexander for the one-touch, left-footed finish.

With 6:30 left, Tiger captain Jair Cano won a ball in his half and started an advance against several defenders, progressing to midfield. Defender after defender lunged in vein as Cano kept the ball glued to his foot before setting up Alexander for the score.

“It was one of the most impressive individual efforts I’ve witnessed,” Coach Mike Lambert said.

“Jair put a shot on frame, which the goalie could not handle, and Rhaymani Alexander again cleaned up the loose ball for the easy tap in.” 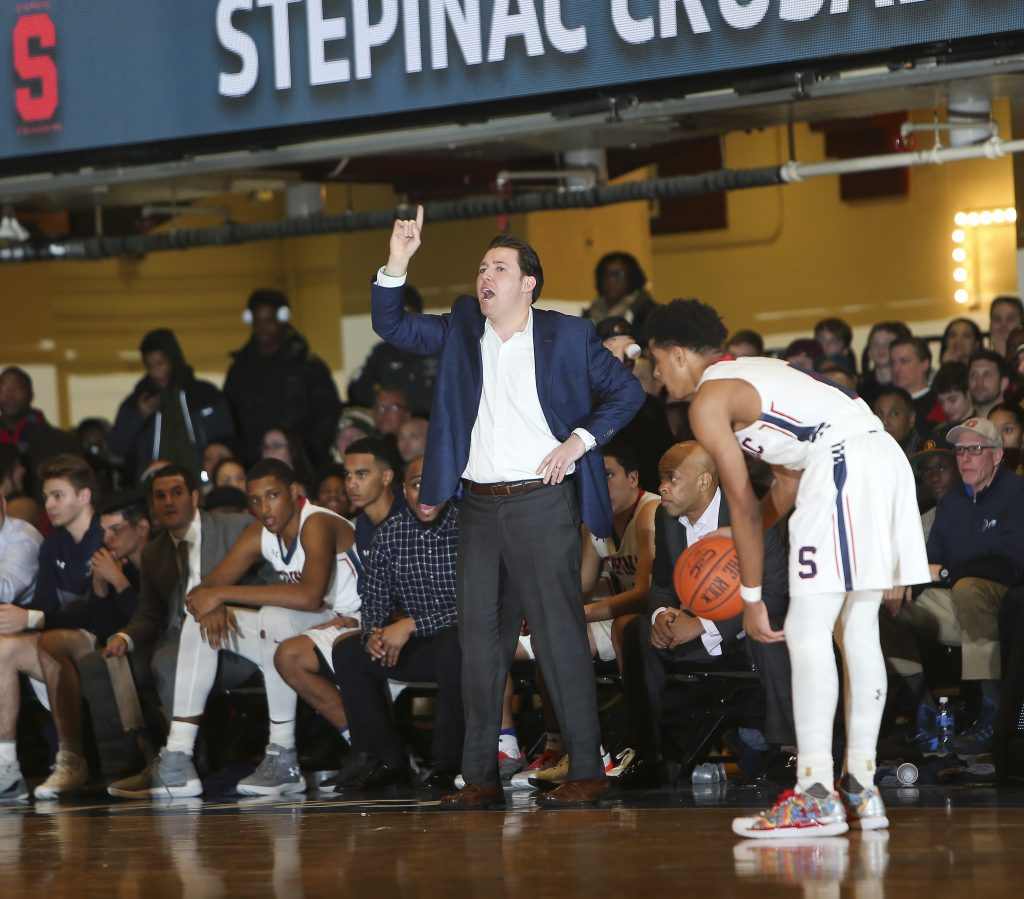 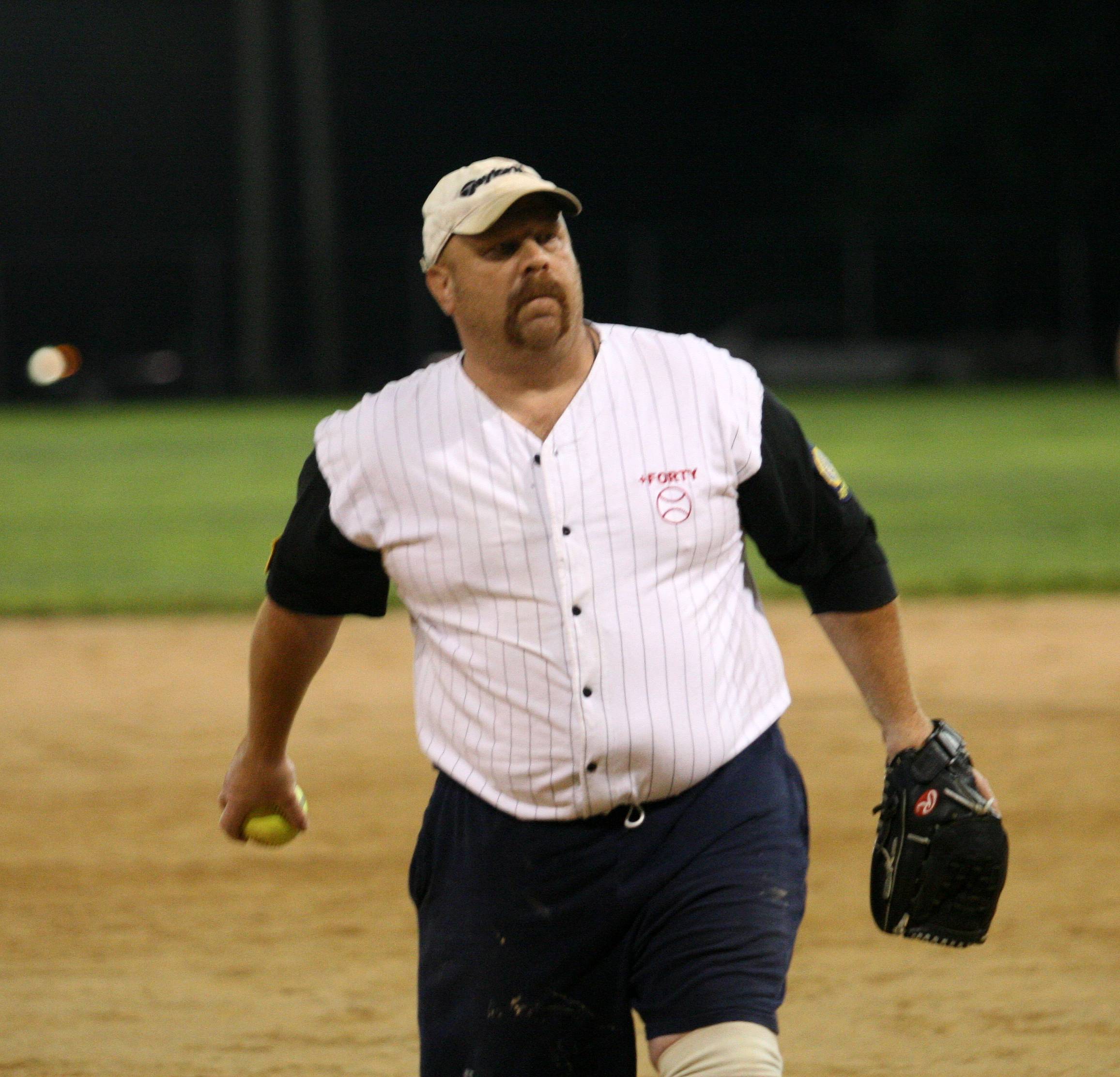 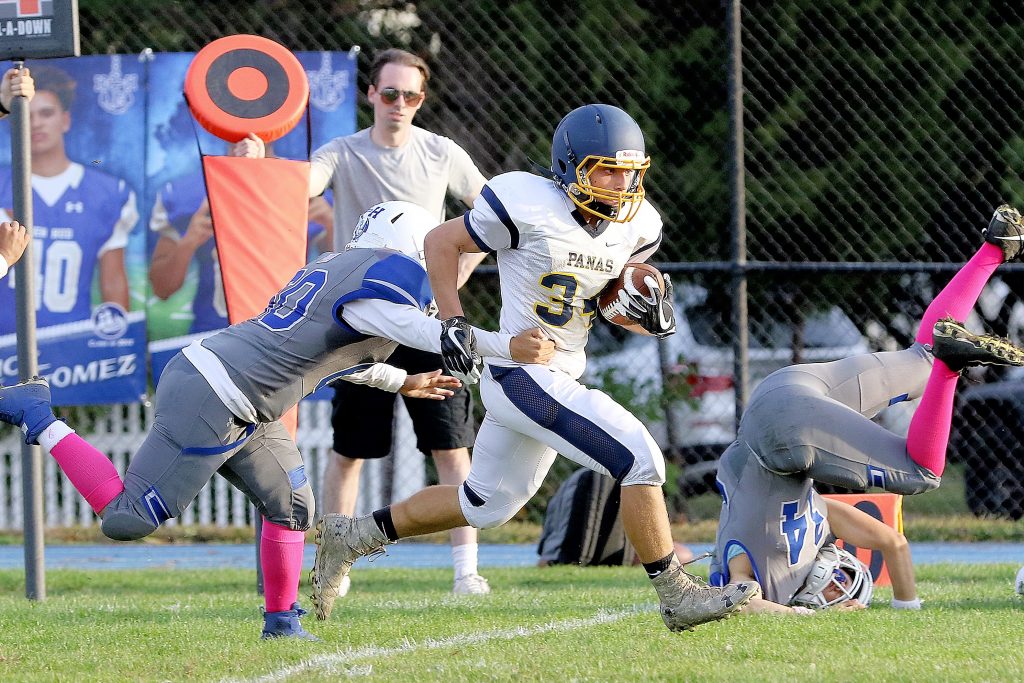