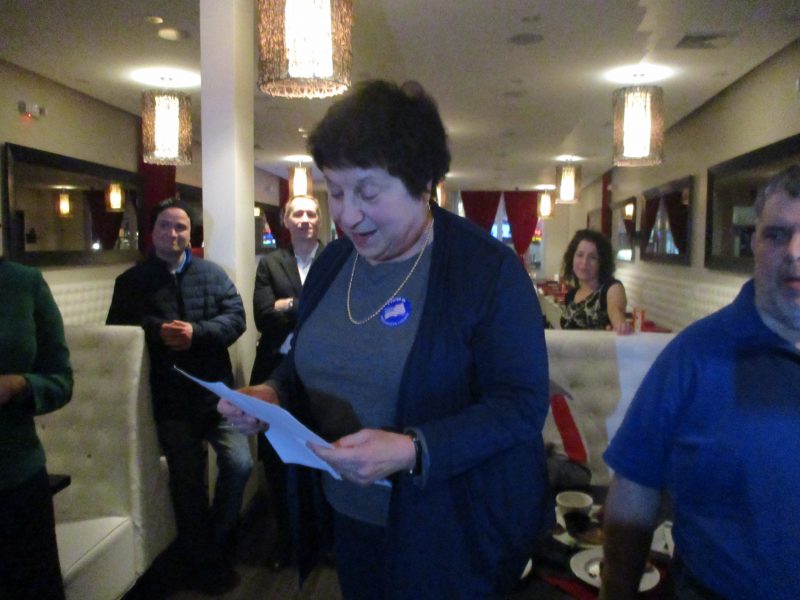 It was no contest in White Plains on Election Day as Democrats swept all three races for Common Council seats by wide margins.

According to unofficial results from the Westchester County Board of Elections with 40 of the city’s 46 districts reporting, Councilwoman Nadine Hunt-Robinson, who also was on the Working Families Party line and was the only incumbent running for reelection, received 4,518 votes (26 percent); Jennifer Puja, who was also on the Working Families line, received 4,429 votes (26 percent) and Victoria Presser received 3,395 (20 percent).

The seventh candidates in the race, Kat Brezler, who was on the Working Families line, received 354 votes (2 percent).

The victorious Common Council candidates thanked their supporters and celebrated their wins on Election Night at Don Coqui.

Presser said she was pledging “to give this work everything I’ve got. I love White Plains and I’m thrilled and honored to have this opportunity to help make it better.”

“There’s one thing you know. It’s that complex challenges rarely have easy answers,” Presser said. “But we will see the way through with thoughtful deliberation and a determination to find consensus and with love for our city.”

Puja recalled being asked during a job interview what was a strength of hers that was also a weakness at the same time. She said, “Giving my all in everything that I do.”

“I ran for this seat on the White Plains Common Council to create opportunities for families, seniors and youth, to continue the progress and to be your voice on the Common Council,” Puja said.

Puja described the winning Common Council slate. “We’re diverse. We’re milt-generational. We each bring so many different strengths. We are White Plains,” she said.

Mayor Tom Roach celebrated the Common Council victories. “The voters have spoken more eloquently than I can about the caliber of our candidates and the direction the city is headed in” Roach said. “Every time we have these campaigns they (opponents) try to convince people that you’re actually miserable and it’s actually a terrible place to live and it doesn’t fly because that’s not how people that live here feel. And I think that this city is leading on every issue that matters to Democrats.”

Westchester County Executive George Latimer said, “because there was a primary people got ginned up nice and early and stayed that way for the whole summer and the whole fall. So what we saw out there is exactly what makes White Plains special, people who step forward to help lead the community.”