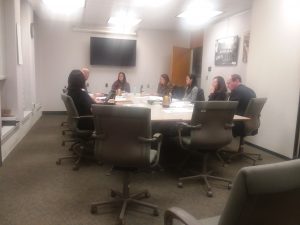 The New Castle Town Board last week discussed the possibility of solving a longtime dilemma – diverting sewage from the failing Fox Hollow Wastewater Treatment plant that serves Riverwoods and Yeshiva to the Mount Kisco pump station.

A long-term solution could be on the horizon to divert sewage from two New Castle communities to the Mount Kisco pump station after officials in both municipalities have agreed in principle to the plan.

Last Wednesday, a joint letter from New Castle Supervisor Ivy Pool and Mount Kisco Mayor Gina Picinich to County Executive George Latimer requested Westchester County accelerate a capital improvement project that would enable sewage from the 149 parcels at Riverwoods and two parcels at Yeshiva to be diverted from the aging Fox Hollow Wastewater Treatment Plant that serves both communities.

If granted, the request would alleviate a chokepoint in the county’s Saw Mill Sewer District trunk line on Hunts Place in Chappaqua that narrows from about 36 inches in diameter, Pool said. The county has had plans to include the project in its 2025 capital budget, but Riverwoods and Yeshiva desperately need relief sooner since there is ongoing danger that sewage from the deteriorating 35-year-old Fox Hollow plant could discharge into the nearby Croton Reservoir, jeopardizing New York City’s drinking water supply, she said.

In exchange, New Castle and Mount Kisco have agreed to cap their flows to the village’s pump station at current levels through 2027.

Pool said there have been positive conversations with the county and the other parties that have been involved in the discussions.

“When you look at this on a map, it makes so much sense,” Pool said “It’s the shortest distance between two points, and there is a solution out there in regard to creating this relief.”

For well over a decade, there have been plans to send the sewage from Riverwoods, Yeshiva and Random Farms to a trunk line to be built along Route 100 through Millwood and into Briarcliff Manor to pick up a county sewer line, she said. However, that diversion project has stalled because of the $26 million estimated price tag. Money from New York City’s East of Hudson funds, which was to pay to protect the city’s drinking water supply, would have paid for up to $16 million of the work.

Random Farms is making upgrades to its wastewater treatment plant and notified the New York City Department of Environmental Protection (DEP) last summer it would comply with the agency’s regulations regarding the upgrade.

Although the latest movement is an important step, Picinich said county approval is just one hurdle the communities must clear in order for the plan to be approved. A key player is the DEP, which must approve an exception to an agreement dating back to 1908 that prohibits Mount Kisco from accepting sewer flow from a community outside its borders.

A few weeks ago, there appeared to be consensus during a meeting attended by representatives from both municipalities, commissioners from the county’s Department of Planning and the Department of Environmental Facilities, the DEP, the Board of Legislators and Riverwoods, Picinich said.

“The city seems very amenable to this, so this seems like the right solution as well,” Picinich said. “This will be more cost-effective and it also provides a permanent solution rather than if they simply build another wastewater treatment plant in the same location.”

Under the tentative terms of the agreement, Mount Kisco’s flow must not exceed 3,227,000 gallons during any 24-hour period, Picinich added. If the daily average flow exceeds that number, Mount Kisco would have to pay a fine and a penalty, she said. Currently, the pump station handles about 1.6 million gallons a day.

Another step would require Mount Kisco to complete upgrades to its pump station to accommodate the increased flow, Picinich said.

Riverwoods property manager Joe Speyer said it would be the most practical and economical solution to divert the sewage to Mount Kisco. From the development’s property, it would need to travel only about 1,200 to 1,500 feet to reach the county sewer, he said.

“The plant is 35 years old. We’ve done everything we can do to keep it going,” Speyer said. “Last week, a couple of other items appeared. We fixed it and we moved on. So we’re fixing but we’re coming to a point where there’s only so much time.”

While it is unknown what the cost would be to complete the work, officials are certain that it would be significantly cheaper than the previous $26 million estimate.

Pool said the cap on New Castle’s flow, which is outlined in the tentative agreement, would be 800,000 gallons a day, and this would not be a problem for the town. Any development in downtown Chappaqua would flow south, she said.

Picinich said New Castle and Mount Kisco have worked well together to help a neighboring community and to address an environmental danger.

“What this really is, I think, is an exercise in good government, trying to find a solution, and at this point in time, we’re working together to do that and the driving factor here is the environmental concern,” Picinich said.